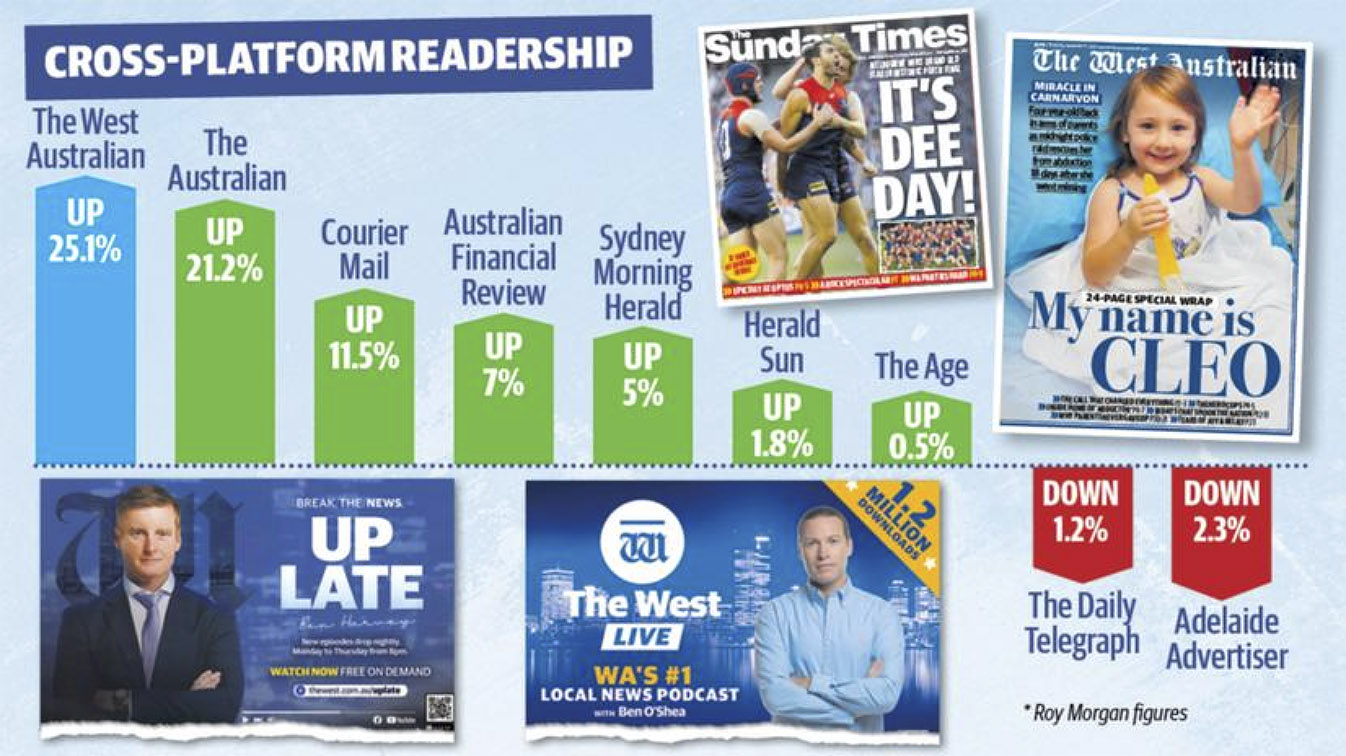 West Australian Newspapers has retained its dominant position as the fastest-growing news brand in the country, with its cross-platform audience rising a staggering 25.1 per cent in the past year alone.

The Roy Morgan data reveals The West Australian and its brands, including The Sunday Times and the PerthNow website, have grown by 882,000 readers in the 12 months to September.

The 25.1 per cent rise is the biggest of any news outlet – ahead of The Australian’s 21.2 per cent growth.

In the past three months, The West’s cross-platform audience grew 6.1 per cent or 250,000 readers. This was also the best quarterly growth of any news brand. The continued rise in readers now means that 82.5% of West Australians read a West Australian Newspapers product every month.

Editor-in-chief Anthony De Ceglie said the growth was on the back of the company’s philosophy to turbo-charge its digital offerings while also continuing to invest in the newspapers.

Readership of The West Australian newspaper during the week was up 13.3 per cent year-on-year and the Saturday edition was up 20 per cent. The Sunday Times also grew 13.2 per cent during the 12 months to September.

De Ceglie said West Australian Newspapers was proud of the innovative ideas it had launched in recent times that had seen it attract brand new audiences.

“The performance of our new TV show, ‘Up Late with Ben Harvey’, has been a real highlight in 2021,” De Ceglie said.

“One recent episode had more than 400,000 viewers. Meanwhile, The West Live radio show hosted by Ben O’Shea is now a genuine disrupter to the traditional market. Some episodes are getting 35,000 listens. Our latest podcast, ‘My Name is Cleo’, is already in the top 15 shows in the country just a few days after it launched.”

De Ceglie also said the transformation of The West Australian’s business team under Sarah-Jane Tasker had been really important.

“We recently teamed up with CNBC to give our readers access to the world’s biggest financial news network,” he said.