You have robots from the future travel through time to steal it back. The campaign launched in phases so that it could react to COVID-induced supply uncertainty. In the teaser phase, our robots subtly infiltrated our ‘normal’ looking ads. And at pre-launch and launch, the bots burst to life in TV social, radio, digital, out-of-home and CRM in an effort to get their futuristic car back. 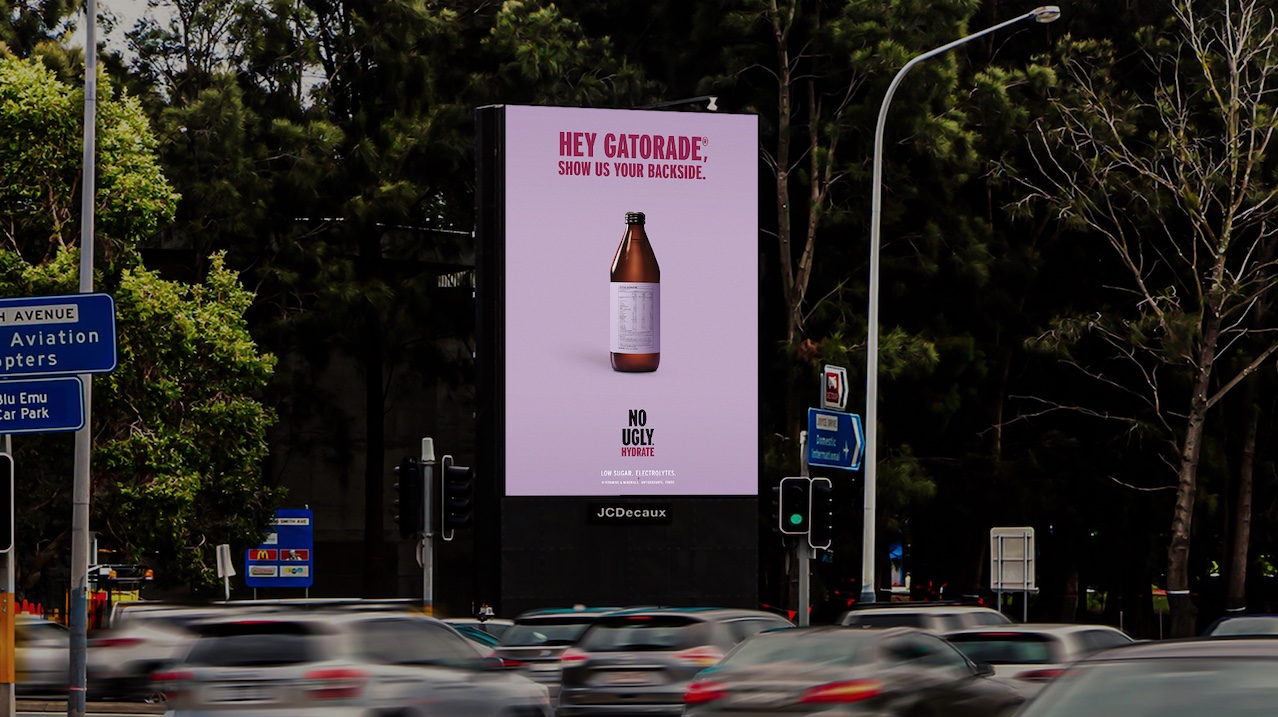 No Ugly: Hydrate
Innocean Australia
No Ugly Hydrate is a Sports Hydration Drink with ‘no ugly’ ingredients. The brief was to launch a hydration drink in a category that spends millions on its image through athlete endorsements and team sponsorships.

As a tiny start-up from NZ, we couldn’t compete on branding. Where we could compete was our ingredients. So, we turned our ingredients into our branding.
We doubled down on the part of the label that everyone else tries to hide, making it front and centre on supermarket shelves across Australia.

Hyundai & Surfing Aus: Electric Air
Innocean Australia
Hyundai used their sponsorship of one surf competition to create their own. Hyundai Electric Air was as innovative as the Kona Electric itself, capturing the imagination of the best surfers from around Australia.
A set of keys hung five metres below an electric blimp. The first surfer to perform an aerial out of the wave, grab the keys, and land back on the wave won a Kona Electric car.

Hyundai Staria Load: Van in a Van
Innocean Australia
Hyundai’s new work van had more size, space, safety and technology to get the job done. So, to demonstrate the Staria-Load’s superior size and space, we loaded it with a competitor vehicle. But not just any competitor vehicle. We loaded it with the market leader, reimagining a traditional product demonstration by showing their van inside ours.

Kia EV6: Making History
Innocean Australia
The EV6 as a modern pioneering feat. A challenger to everything that had gone before it. So we composed an epic soundscape of past pioneering transportation that sat over cinematic shots of the EV6 and convention-breaking dynamic graphics. Our near-silent ending perfectly demonstrated what the future of automotive sounds like and shone a light on the EV6 as the new history maker.