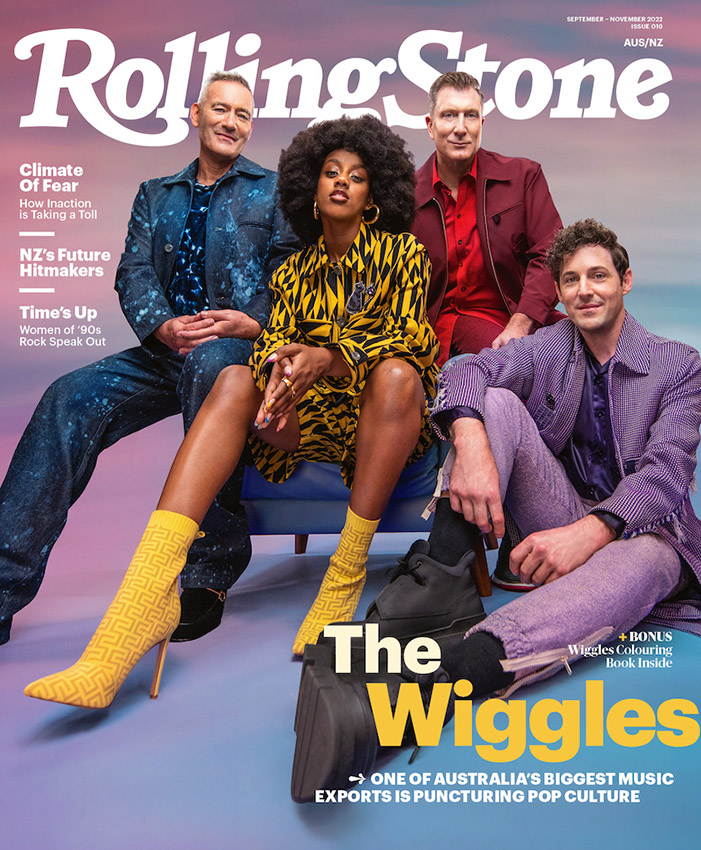 Rolling Stone AU/NZ publisher The Brag Media has today announced that multi-award-winning band The Wiggles will grace its September issue cover, cementing the group’s first time to be anointed by Rolling Stone. Yellow Wiggle, Tsehay Hawkins, also becomes the youngest person to appear on the local cover of the iconic pop culture masthead.

The Wiggles granted Rolling Stone AU/NZ unprecedented access to their recent Australian arena tour — a double headliner with the new and original lineup — and to their Hot Potato Studios in Sydney, as they worked on new music and rehearsed a brand new TV show.

The Wiggles as you’ve never seen them before, the cover story is a colourful take on a record-breaking two years. It began with a mashup of “Fruit Salad” and Tame Impala’s “Elephant” (that later topped triple j’s Hottest 100), followed by the addition of Hawkins as the group’s first woman of colour, and a spectacular sold-out tour with all original members.

Rolling Stone AU/NZ print editor, Jake Challenor, said: “Just like Rolling Stone, The Wiggles have stood the test of time. Here is a band that, for three decades, has entertained and inspired future generations,” he said. “The last two years have been some of their best in history. The Wiggles are more relevant than ever, which is exactly why pop culture icons like Lil Nas X and The Kid Laroi are embracing them. Without a doubt, 2022 is officially the Year of The Wiggles.”

The September-November edition — which includes a Wiggles-themed adult colouring book — hits newsstands in Australia and New Zealand on Monday, September 5, 2022. Also appearing in the next issue are interviews with musicians Ben Lee, Eddie Benjamin and Teeks, plus Twitch streamer Whippy, and features on the climate crisis, niche influencers and much more.