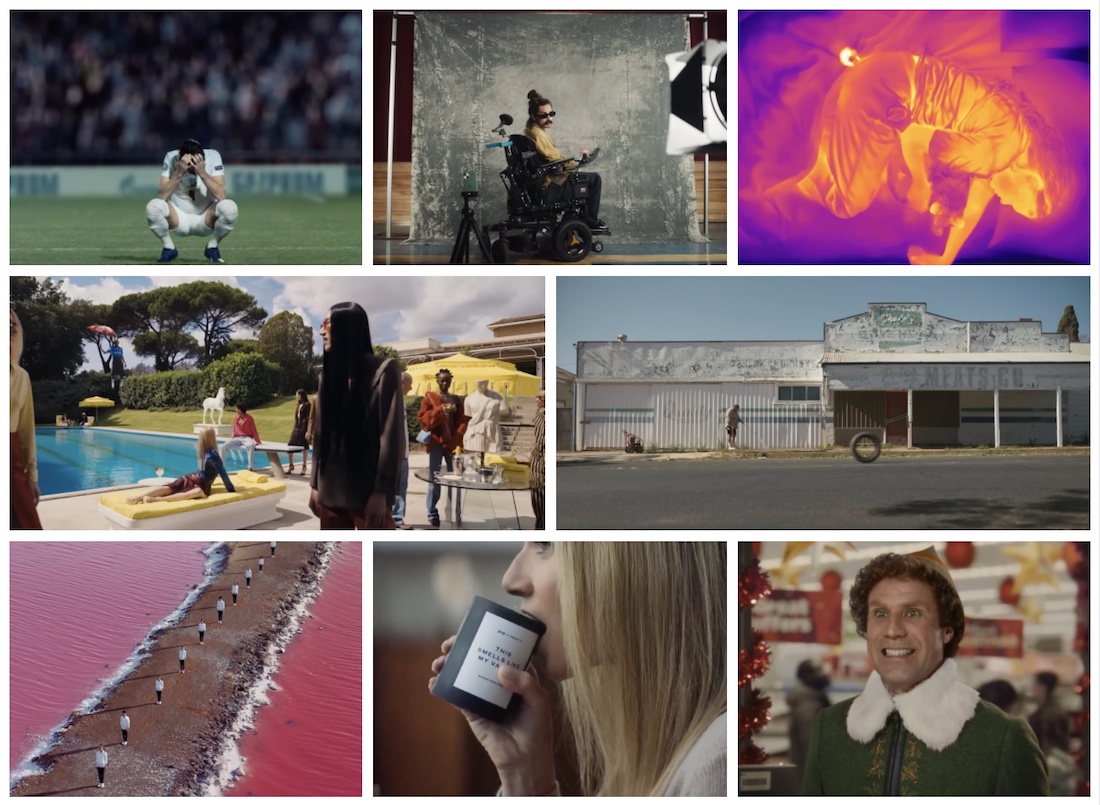 Advertising doesn’t have the playground to itself anymore.

You might argue that it hasn’t for many a year. But somehow this year that lack of control or command became super apparent.

When thinking of the most interesting and compelling – ie memorable – things that occupied our minds this year, there was so much else competing for our attention that advertising was really put in its place.

Yes the things that instantly come to mind are the protests, the controversies, the put downs and the things that appal. Whether that be war, vitriol, delusion or degradation.

In that context, any advertising can rapidly become vapid.

But if we as an industry are meant to be communicators, then it feels like a hell of a lot more people proved to be better at it than we did in 2022.

You may not like the idea of chucking a tin of soup at a painting of sunflowers. (And frankly it does beg the question if you are so anti-oil, why use superglue – something that can only be made from oil – to stick yourself to a picture frame?) But it sure did get our attention. And probably more so than chucking a bunch of sunflowers at a painting of Campbell’s Soup cans.

The protests at Qatar were sophisticated and powerful. From the German team covering their mouths highlighting the censorship of the One Love armband to the Iranian team refusing to sing their anthem as a potent symbol of anti-government unity. From the Socceroos releasing a statement before the event started to the BBC choosing not to broadcast the Opening Ceremony on their main channel, FIFA and the Qataris found having a world stage works both ways, however much you try to control it.

A Message from the Socceroos

To combat the betting manipulators who jovially exploit the vulnerable in this country, the government is introducing a new line to replace ‘Gamble Responsibly’. ‘Chances are you’re about to lose’ may not stop their skullduggery, but it might force them to act responsibly.

And sporting stars are realising they have the power to stop politics getting in the way of a good game by getting big energy or gambling off their chests.

On the morning after the death of Her Majesty The Queen, every media company in the UK changed their billboards to the same image celebrating the era of Elizabeth II. It made a journey around the streets a solemn one. But proved how spectacular advertising space can be when used powerfully.

And who’d have thought that a short film featuring HRH and Paddington for the Platinum Jubilee would come to be a legacy so particular, that people would leave marmalade sandwiches outside Buckingham Palace at her passing, not to mention thousands of bears.

The January 6 Committee pulled together a case so comprehensive and compelling that somehow the truth started to emerge and feel real again. Their determination to deliver a clear unambiguous display of events without resorting to smugness or satisfaction cut through. And one feels it has helped to bring America to its senses against a man who’s become the definition of delusion, the medical condition.

The protection of our individual and collective mental health is probably the most significant thing to emerge from our time in Covid.

For creative people in particular, it feels like working from home has made us more vulnerable and isolated. It’s why it is so important to get people back to communal work and why anonymously putting other people down on blog sites is so toxic.

And it’s why the work for CALM (Campaign Against Living Miserably) is the first piece of advertising that stands out from the year.

The Last Photo is a campaign of images showing that suicidal doesn’t always look suicidal. An exhibition and film of real images and videos that were literally the last images of people who took their own lives. Often laughing, interacting and seemingly without worry, the result is both haunting and forceful.

But the agency, Adam&EveDDB, were not content to just create one piece of content. They used the World Cup to make an even more powerful statement. With a film featuring England player Declan Rice.

The painstaking work to remove all the players from various games featured leaves this one player stranded, almost balletic in his movement, but awkward, hopeless and ineffective.

There’s been no better bit of creative work this year in my opinion, made even more effective through the context and the likely audience who may be forced to confront the issue through the language of sport. Something they are far happier talking about than solitude or loneliness.

Which brings me to the advertising that rates a mention. I’d love to say there was a lot to choose from, and that there were new voices emerging this year that rose to the surface.

But if you are feeling a sense of déjà vu from the following list of work worth celebrating, me too.

Because the best work appears to have come from Megaforce, Kim Gehrig, Uncommon, Gucci and Burberry.

The Apple spot which capped the year on the International Day of People with Disabilities – shows the many and varied ways that their tech makes life more rewarding for every individual.

In Kim Gehrig’s hands this becomes an event. Using the theme track ‘I Am The Greatest’ the poetic words of Muhammad Ali sung by Spinifex Gum/Marliya Choir, re-inspire us and leave us in no doubt of what people of all abilities are capable of.

This is advertising that sets the benchmark. And the fact that Kim continues to do this is remarkable. Not least because she did it twice this year with a follow up work for Bodyform.

I think it proves we are entering an era where there is a divide emerging. Because Kim is truly a communication artist.

And when you examine the work that has really shone this year, you realise it has happened when the people with the brand have got very close to the artists with the skills to showcase and celebrate their wares or worth.

The dig at ad agencies from the half way point is frankly rubbing salt into the wounds for many – but I think there’s a reason why now feels like the right time to do that.

Agencies are proving themselves to be the entities which get in the way, rather than the source of creative opportunity and optimism.

And while you may not like this Burberry / Megaforce film as much as their previous efforts (Singing in the Rain and Open Spaces), there is a delight and bravado at work, which can only happen when everyone’s confident in each other’s abilties.

Of all the agencies in the world who seem to contribute to the relationship rather than make it stale, Uncommon seem to have discovered the magic potion.

This year, their work for B&Q and British Airways gave both brands a purpose without resorting to case-study creativity.

Oscar Hudson – yes, another name from previous years – creates a world where life turns on its head at the imminent arrival of a new baby. There are ways to have made this film with less integrity and originality. But in making it in camera, the story hits home and makes us marvel all the more.

And in British Airways, the agency realised that confidence in an idea is infectious. By making hundreds of films and versions of this simple set-up, and by running them all at once, the brand gets both scale, relevance and credibility.

In Australia, interestingly, another example of client getting closer to creative expert came in the form of Bear Meets Eagle on Fire and NRMA.

‘Until then’ is a truly campaignable idea for an insurance company. And by reducing it to its simplest, purest notion, then exploring and exploding that into something magical and engaging, the result feels both fresh, distinctive and persuasive.

You may not realise it, but what you are being sold here is confidence. Because put this piece of work up against the noise and angst of the competition, and NRMA appears reassuring, valuable and trustworthy.

I imagine that was there in the brief somewhere. And what this work does is make us feel it rather than say it.

During COP27, Tuvalu released an interesting idea via The Monkeys – following on from their Foreign Minister’s talk knee-deep in water for the Glasgow conference.

This time the suggestion that the nation was going to be digitising itself for future preservation was sufficiently shocking to make the news.

But somewhere along the line, the work felt like the nerds at the Metaverse wanted us to not think that was a bad idea. And mid-way through the talk, we are then asked to think preserving the culture in the metaverse might not be such a shocking thing to do after all.

I am not sure you can have it both ways. But I am sure this campaign will feature in the upcoming award cycle.

The Monkeys also brought out the big guns for their Qantas spot. Kylie, Hugh, Troye, Adam were all there in the remake of Mojo’s ‘I Still Call Australia Home’.

It seems at times that this is where The Monkeys shine – in making ads that in less groovy agency’s hands could go hammy, they go starry – with strong art direction and style.

Qantas: Together Once More

Special Group continued its global expansion with a spot so sparklingly in the zeitgeist that it hurt. I mean, getting Gwyneth to eat a vagina candle in the same spot as Jennifer Coolidge (aka Tanya McQuoid) is just too cool for school.

That said, it feels like all American ads have become rather ‘superbowl’ in nature. As long as there is a celebrity in sight, who needs an insight?

Rather unexpectedly, Asda won Christmas. Despite nice efforts from Australia Post and John Lewis and a truly miserable but profound spot for German retailer Penny, getting Will Ferrell to reprise his role in Elf at and Asda was suitably magical to make us all believe.

Which brings me to the last spot. For FTX. Which is actually just an ok Superbowl ad. But in hindsight, somehow brilliantly all the more remarkable and enjoyable. Actually, given recent events, it’s genius.

It seems to somehow capture the situation advertising faces these days. We can make anything look and sound great.

If only real life didn’t keep on getting in the way.