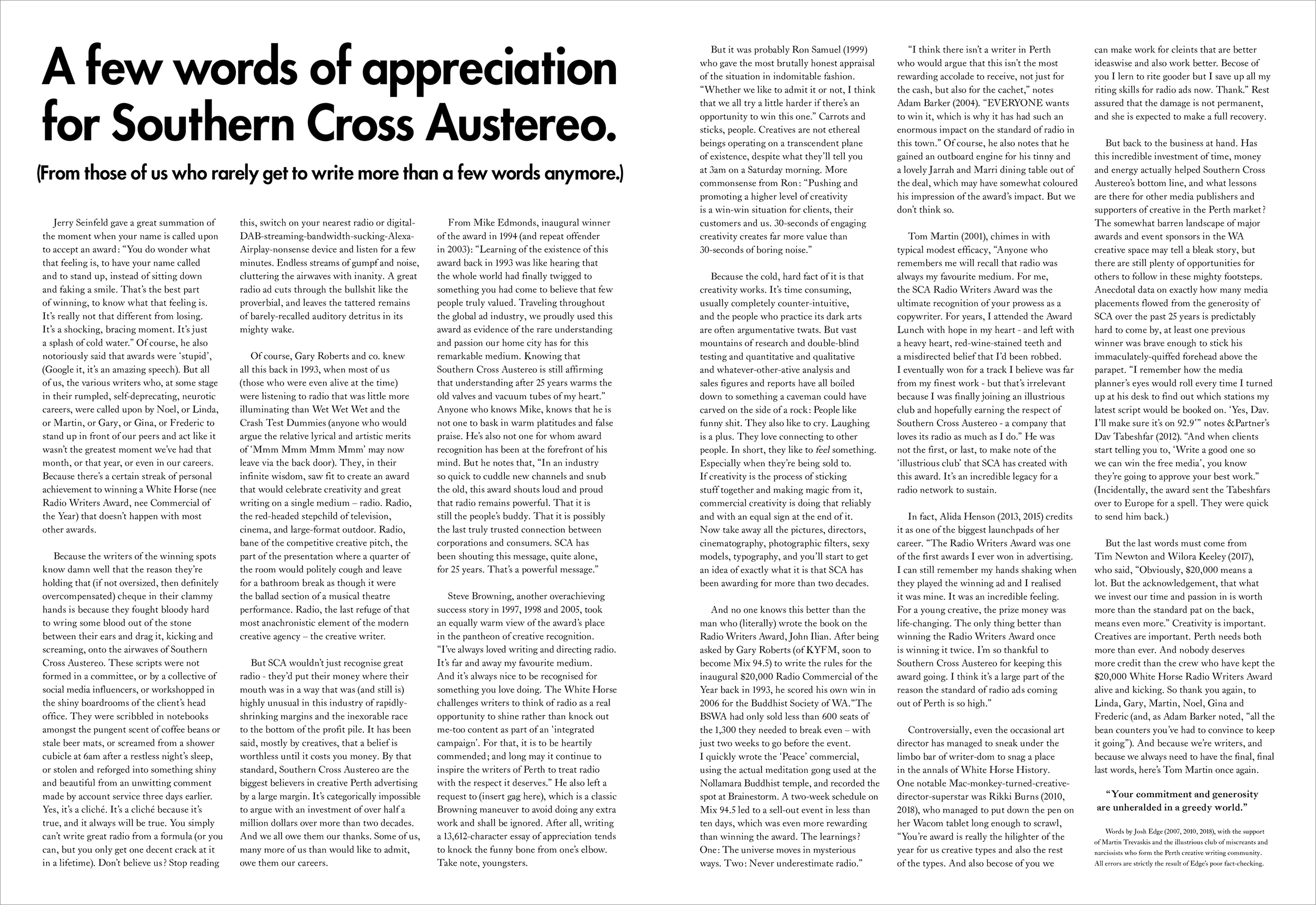 Formerly known as the Radio Writers Award, The Southern Cross Austereo White Horse has been rewarding excellence in Radio advertising with its renowned $20,000 annual prize since 1994.

To say thanks for SCA’s long-term support of creativity in Perth, three-time winner Josh Edge (with help from Meerkats colleagues Rikki Burns, Jade Koch and Chris Hyland) put together an epic dissertation on how much the award means to local creatives, featuring reflections from some former winners, which appears in the current (March 2019) issue of Campaign Brief WA.

Everyone contacted for the exercise sent a generous response, including Tom Martin from Spain, Ryan Albuino from London and Mat Garbutt from Melbourne.

Unfortunately, Edge wasn’t able to fit everyone into the DPS, so here are all the contributions from a grateful Perth creative fraternity. Thanks SCA!

My love of advertising was born in radio. Me and a small band of auditory diehards studied the greats of acoustic creativity the way art students studied Monet and Picasso. Except few people had ever heard of our idols Spike Jones, Dick Orkin, Bert Berdis, Street Remley.

Learning of this award in 1993 was like hearing that the whole world had finally twigged to something you had come to believe that few people truly valued. Traveling throughout the global ad industry we proudly used this award as evidence of the rare understanding and passion our home city has for this remarkable medium.

Knowing that Southern Cross Austereo is still affirming that understanding after 25 years warms the old valves and vacuum tubes of my heart. Thank you.

Radio is possibility. Long before CGI and green screens, it could bring to life anything imaginable. All at a fraction of television, or even “content”, budgets. It’s still my favourite medium by far. As for winning the Radio Writers Award, the money was nice, but for me it meant joining a club of writers I idolised.

Congratulations to all past winners, and also to Southern Cross Austereo. Radio is in good hands.

I’ve always loved writing and directing radio. It’s far and away my favourite medium. And it’s always nice to be recognised for something you love doing. The Radio Writers Award challenges writers to think of radio as a real opportunity to shine rather than knock out me-too content as part of an ‘integrated campaign’. For that is to be heartily commended; and long may it continue to inspire the writers of Perth to treat radio with the respect it deserves. (Insert gag here.)

Whether we like to admit it or not I think that we all try a little harder if there’s an opportunity to win this one. Pushing and promoting a higher level of creativity is a win-win situation for clients, their customers and us. 30-seconds of engaging creativity creates far more value than 30-seconds of boring noise.

Thank you, Southern Cross Austereo, for initiating and supporting this amazing award for 25 years. I am so grateful to have been the Year 2000 recipient, but I’m also grateful that this contest has improved the quality of radio commercials for decades. It’s given punters a better listening experience and given Perth clients the confidence to approve more engaging and potent work. Exactly as you always intended!

Anyone who remembers me will recall that radio was always my favourite medium. For me, the SCA Radio Writers Award was the ultimate recognition of your prowess as a copywriter. For years I attended the Award Lunch with hope in my heart – and left with a heavy heart, red-wine-stained teeth and a misdirected belief that I’d been robbed.

I eventually won for a track I believe was far from my finest work – but that’s irrelevant because I was finally joining an illustrious club and hopefully earning the respect of Southern Cross Austereo – a company that loves its radio as much as I do. Thanks girls and boys. Your commitment and generosity are unheralded in a greedy world.

I think there isn’t a writer in Perth who would argue this isn’t the most rewarding accolade to receive, not just for the cash, but also for the cachet. EVERYONE wants to win it, which is why it has had such an enormous impact on the standard of radio in this town. Thank you again Linda, Gary, Martin, Noel, Gina and Frederic (and all the bean counters you’ve had to convince to keep it going). P.S. I used the prize to buy an outboard engine for my tinny and a lovely Jarrah and Marri dining table, both of which bring me much happiness to this day.

When Gary Roberts – then Managing Director at KYFM (before it became Mix 94.5), asked me to write the rules for his idea to award a $20,000 prize for the Commercial of the Year, I was delighted. It was about three or four years after the 1989 inaugural PADC Awards in which I was involved – so in writing the rules, I had that experience to fall back on.

I have always loved radio. Between its initiation and 2006, I had won several monthly Radio Writers Award finalists, but I never imagined winning it.

Hosting the 2006 International Buddhist Conference, the Buddhist Society of WA (BSWA) booked the newly completed Convention Centre. They had only sold less than 600 seats of the 1300 they needed to break even – with just two weeks to go before the event.

I quickly wrote the ‘Peace’ commercial (aimed at non-Buddhists). The gong sfx with the very long sustain, is the actual meditation gong used at the Buddhist temple in Nollamara. The commercial was produced at Brainestorm with the help of Justin and Marty Braine.

A two-week commercial schedule on Mix94.5 ensued – and the event sold out in less than ten days. Believe it or not, I found that more rewarding than winning the Award. Nonetheless, I was totally gobsmacked to win it. I shared the prize money with my partner at Sharper Pencil and the two guys at Brainestorm. I should acknowledge the unstinting support of Sol Hanna of the BSWA.

The learnings? One: The Universe moves in mysterious ways. Two: Never underestimate the potency of radio.

You ruined Cannes for me! Keep up the amazing work and here’s to another 25 years of what ought to be the most coveted advertising award on the planet.

It was great recognition for not stopping at the first idea, nor the tenth, nor twentieth. Monetarily, each of my three wins contributed to key milestones – including getting into our first and second homes. Honestly, it’s one of the main reasons Perth is renowned for its brilliant radio writing. This comp has bred two generations of highly-driven radio writers, hell-bent on pushing the medium beyond its creative limits.

I remember how the media planner’s eyes would roll every time I turned up at his desk to find out which stations my latest script would be booked on. “Yes, Dav. I’ll make sure it’s on 92.9.” And when clients start telling you to “Write a good one so we can win the free media”, you know they’re going to approve your best work.

So thank you so much SCA. You’ve made radio the sexiest medium in town – and paid for The Tabeshfars to go to Europe.

The Radio Writers Award was one of the first awards I ever won in advertising. I can still remember my hands shaking when they played the winning ad and I realised it was mine. It was an incredible feeling. For a young creative, the prize money was life changing. The only thing better than winning the Radio Writers Award once, is winning it twice.

Thank you so much to Southern Cross Austereo for keeping this award going. I think it’s a large part of the reason the standard of radio ads coming out of Perth is so high.

It’s no coincidence Perth has an exceptional record of creating world-class radio ads, while also having the best cash prize in the country (and the world?). The pursuit of clever, innovative radio ads in this town is no doubt fuelled (at least partly) by the knowledge that one 30-second script could win you $20k. Winning as a freelancer was a godsend.

Thanks SCA for pushing us all creatively. And thanks especially for an unexpected contribution to my dwindling family holiday fund.

$20,000 means a lot. But, the acknowledgement that what we invest our time and passion in is worth more than the standard pat on the back, means a lot more.