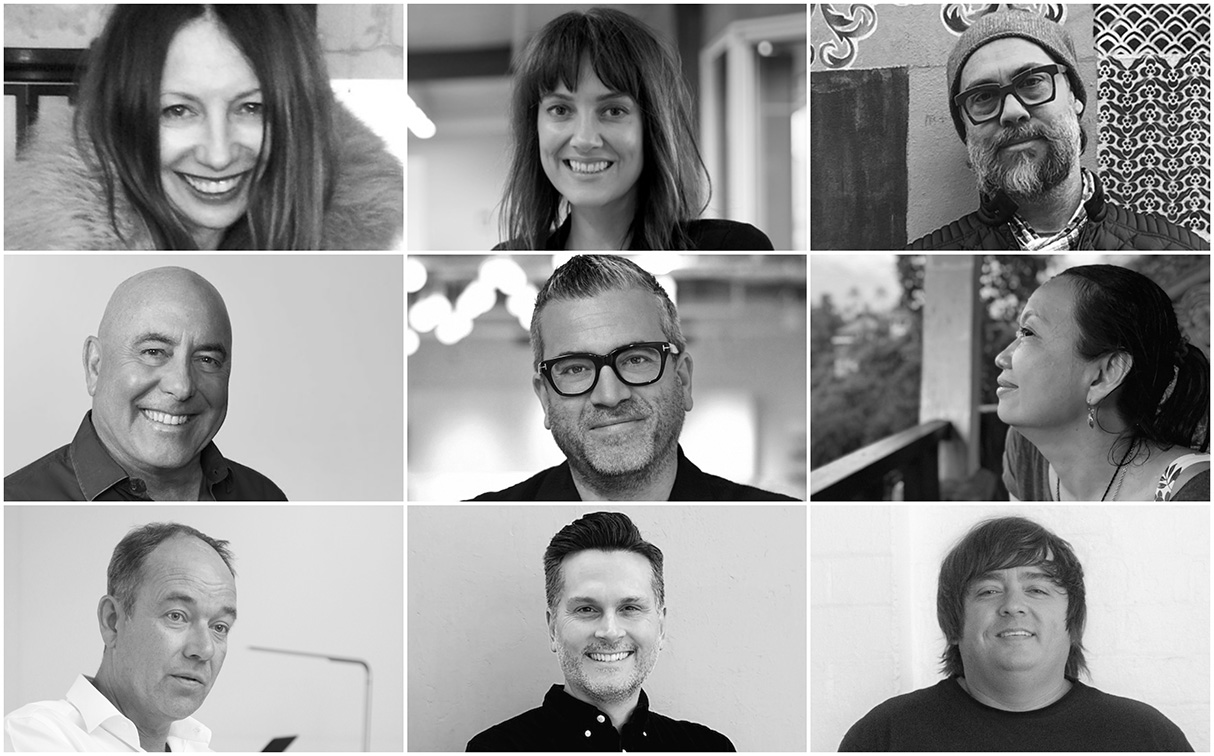 The excitement is building for Friday night’s Oasis Ball and Campaign Brief WA Awards. Here’s a reminder of the world-class jury that judged the creative categories this year. The jury includes three former Cannes Lions Jury Presidents and three of Perth’s most awarded and respected creative exports.

All Campaign Brief Awards winners and finalists will be announced on stage at the gala Oasis Ball on Friday night.

One of Australia’s most celebrated and respected Aussie expats. Born in the UK, raised in Australia and a New York native for nearly 20 years, she is a true global citizen. At J Walter Thompson she worked on Johnson & Johnson, Cadbury’s Trident, Bubalicious and Halls, and was global ECD on Schick. Before joining JWT Barclay spent five years at Saatchi & Saatchi New York as the Global CD on Ariel and Dash.

Prior to going to the States, Barclay was a senior creative at Clemenger BBDO Melbourne and before that The Campaign Palace, Melbourne. She is best known for co-creating three of the all-time greatest Australian commercials: Antz Pantz ‘Sic em Rex’, Milk ‘Legendary Milkman’ and Yellow Pages ‘Not Happy Jan’.

Rob Belgiovane, the founder and former CCO of BWM Dentsu, is one of the legends of Australian advertising. BWM Dentsu was acquired by Dentsu Aegis Network in 2015 and has grown to over 200 staff across offices in Sydney, Melbourne and Brisbane.

Belgiovane retired on a high, with his agency ranked 9th in the world in 2020 in terms of creativity for awards across several clients – which culminated in a Cannes Lions Grand Prix and a D&AD Black Pencil for “Project Revoice”.

Perth-expat Reed Collins joined Ogilvy in 2013, and was promoted to Chief Creative Officer Asia in 2020. Collins started his stellar career on a very early Mac at Campaign Brief in Perth in the early 90s. Following AWARD School, Collins then had casual stints at Shout! and JMA Ogilvy & Mather in Perth before heading to Mojo in Sydney.

When Hunt LascarisTBWA Johannesburg founder John Hunt paid a visit to Australia in the mid 90s, Collins pestered him for a job and weeks later he headed to South Africa. After a few years in SA, Collins headed to Lowe Howard-Spink London and Cliff Freeman & Partners New York. Collins was the most awarded creative in the world for his Fox Sports campaign, according to 2001 Gunn Report. In addition, he has work displayed in the permanent collection at Museum of Modern Art in NYC.

Jeremy Craigen started his career at the now defunct Ted Bates in 1984. In 1990 joined the admired BMP DDB and during those years he worked on numerous accounts including VW, Sony and American Airlines.

In March 2013 he was awarded The Chairman’s award at the British Arrows for an outstanding contribution to film and television advertising. He departed the agency in 2015 for a new phase in his career, being appointed global chief creative officer of Innocean Worldwide.

In a career that spans a broad range of creative industries, Dettrick has previously worked at well-known creative companies Mambo and Deus Ex Machina. Since joining The Monkeys over 12 years ago he has worked on campaigns for Qantas, Audi, Australian Lamb, Amazon, IKEA, and Canadian Club. Recent work includes his Lamb “Make Lamb, not Walls” and “The Lost Country”. Recent awards include Gold, 2 Silvers and 3 Bronzes at Cannes Lions and Gold at Clio and London International Awards.

Dettrick’s 23-year career spans a range of creative industries, from design and art direction to music composition, writing and film direction. Dettrick was a designer and art director at the iconic Australian fashion label Mambo for 10 years throughout its halcyon days and helped ex Mambo founder Dare Jennings set up his venture, Deus Ex Machina. He is also an established composer and exhibited artist although there’s not as much time for that these days. His latest extracurricular passion, stand-up comedy, sees him regularly performing in comedy rooms and at festivals around Australia supporting some of the countries biggest names whilst trying to solve the worlds most trivial problems, one joke at a time. Dettrick has recently performed at Adelaide Fringe Festival, Melbourne International Comedy Festival & Sydney Comedy festival as a solo performer and with comedy troupe Three Blokes Telling Jokes.

Before heading to BBH London, de Wolf was CCO at Clemenger BBDO Melbourne. Across six years at Clemenger Melbourne, de Wolf was responsible for iconic work including the Transport Accident Commission’s “Meet Graham” – the most awarded creative campaign in the world in 2017 – Snickers’ “Hungerithm”, Airbnb’s “Until We Belong”, and Myer’s “Naughty or Nice Baubles”.

De Wolf started his career in Perth, first as an art director at JMG Marketing followed by a two year stint at Marketforce before being lured to Clemenger BBDO Melbourne for a year. He returned to Perth in 2005 to the art director and general manager role at Campaign Brief, before joining Saatchi & Saatchi New Zealand, JWT in Sydney, and London’s 18 Feet and Rising, the start-up now known as And Rising.

Eastwood’s career kicked off in Australia before moves to the UK and US. He was ECD of M&C Saatchi, Melbourne before he went on to join DDB Australia as national creative director and vice chairman. In 2010 he moved to DDB New York as chief creative officer. And in AdAge’s 2013 Award’s Report, he was listed as the 5th most awarded chief creative officer worldwide.

He was most recently global chief creative officer at McCann Health and has overseen a hugely successful creative performance at McCann Health. At Cannes Lions 2020/21 McCann Health won the PR Grand Prix plus 17 Lions with a record four of their agencies ranked in the Top 10 Healthcare agencies worldwide. The previous year at Cannes (2019) saw the Network of the Year, Agency of the Year (Shanghai) and the Pharma Grand Prix come their way.

In 2020 Fedyszyn (and her partner Jonathan McMahon) joined Special Group New Zealand after nearly two and a half years at Ogilvy New Zealand, where they ran and worked on campaigns such as BP’s ‘Thank You Button’, Auckland Transport’s ‘Most Dangerous Stunt’ featuring Zoe Bell, and New Zealand Police’s ‘World’s Most Entertaining Recruitment Video’ – which won the Grand Axis. Not only entertaining, the recruitment campaign was extremely successful, smashing the Police’s diversity and gender intake targets, whilst netting multiple Gold Effies and Cannes Lions, as well as an inaugural D&AD Collaborative Pencil.

Jureeporn Thaidumrong is one of the most awarded and renowned creatives in the global advertising industry. In 30 years of career journey, Thaidumrong has become one of the most influential figures to shape Thai advertising. Under her leadership, Results/O&M won Thailand’s first-ever Cannes Gold Lion in 2000, and Saatchi & Saatchi won Thailand’s first-ever D&AD Pencil in 2003. In 2005, she opened her own shop, JEH United and created famous and multi-awarded work, including the Smooth-E “Love Story” mini-series campaign

Thaidumrong was selected into 2019 Adweek’s Creative 100 and counted as 1 in 13 Global Creative Leaders from the Ad Industry and in 2006 she ranked #1 in the Campaign Brief Asia Creative Rankings as the Hottest Creative in Asia In 2018 she ranked #1 as Campaign Brief Asia’s Creative Director of the Year. She was named “Southeast Asia Creative Person of the Year” and was honoured with Lotus Legend hall of fame at Adfest 2019 and the Hall of Fame from Bangkok Art Director Association.

In 2015, her agency joined the WPP Network under Grey Group as GREYnJ UNITED where she leads as the Chairwoman/CCO. Thaidumrong is also known for her love of animals and nature. She’s currently hosting 65 stray cats and working on ‘Cat Republic Adoptable Cafe’ fund-raising project to help make stray cats’ life better. In addition, as part of her larger “save the animals” initiative, she’s also working on a massive reforestation and community-building project in Mae Wang, Chiang Mai, Thailand as well as collaborating with Worldview International Foundation and Lykke Corporation on the “TREE coin”, a crypto fund-raising project to help restore the planet’s lost mangrove forests.