Phoebe Sloane and Matt Bladin: We went where? 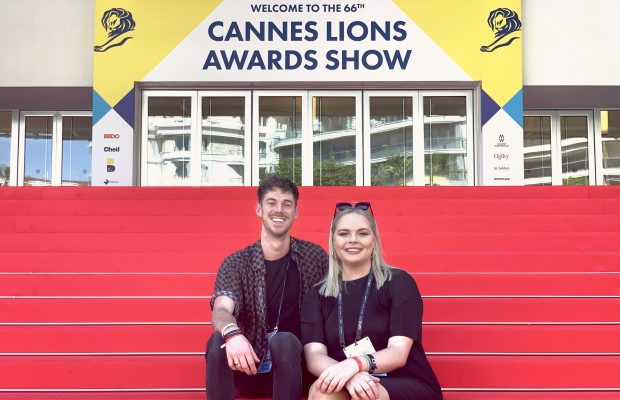 CHE Proximity Melbourne’s creative duo Phoebe Sloane and Matt Bladin recently spent one life-changing week at the Young Lions Creative Academy. They share what they learned from getting up (very) close to the industry’s best.

Cannes. We went to Cannes. If you’d told us two weeks ago that we’d be cruising down the Promenade de La Croisette sipping on rosè, we probably would have laughed.

To be honest, we’re still laughing – out of sheer disbelief.

As two young Aussie creatives from Melbourne, Cannes was always something we’d dreamed of, but naturally expected would happen only later in our careers. We certainly didn’t expect to end up in one of the most intimate advertising classrooms in the world. We were very grateful to our agency CHE Proximity for supporting us and letting us fly the coop for an incredible week of learning.

The Cannes Young Lions Creative Academy is run by advertising legend Bob Isherwood. After a selection process that involved a folio, resume and the answering of the dreaded ‘WHY?’ question, we were ridiculously lucky to have been picked for the prestigious 25-person class. As Bob says, “it’s five years learning in five days”.

From 9am to 6pm each day, our schedule consisted of exclusive presentations from leading creative thinkers; panel discussions in the Palais; guided access to the jury rooms and sessions within company spaces including: Twitter; Facebook and Google.

To describe it as the most exciting week of our lives feels like an understatement. As our brains continue to process, well, everything, we thought we’d share at least three good* things we experienced at Cannes:

Learning about creativity is exchanged person-to-person. It’s how most of us have grown up until this point. At Cannes, we happened to be extremely fortunate to have some of the best creative minds in the world impart their knowledge and experience to us.

We hate to name drop, but how can we not?

If you’re new to advertising, please look these people up – they are re-defining creativity, challenging traditional agency structures and making some of the best work the world has ever seen. Most of them also crack a really good joke.

We may have been an extroverted, creatively-charged group of 20-something-year olds, but we listened intently and hung off every single word spoken. From honest, practical advice to lessons on inter-personal leadership skills, it was the humility and generosity of our speakers that gave us the freedom to be curious in the classroom. To explore everything, feel safe to ask questions and always feel comfortable to share.

Although this was our first time at Cannes, we noticed a few trends emerge throughout the course of the week.

Storytelling was at the forefront of almost every-piece of award-winning work, with emotional messages fortifying relationships between brand and consumer. And, if the story also had an extra element of ‘good’ to it, this got more attention from Gen Z. From constructing a clever rival plot-line in Burger King’s ’Whopper Detour’ to the simple nostalgia depicted in John Lewis’ ‘The Boy and the Piano’, these narratives were relevant across many platforms. It’s these stories that will live on, not only in advertising, but hopefully within popular culture.

Craft also had a strong presence at the festival, with great ideas being brought to life via beautiful design experiences. Carling’s digital clothing collection was not only born out of a tangible problem (fast fashion ruining our planet), accompanied by a real insight (you only wear an outfit once on Instagram) was seamlessly executed into a bold, creative solution. It was exciting to see the relationship between craft and creative evolve. This will only continue to change the way we interact with brands.

We’re hoping to see more of these courageous pieces of work continue to question and become the norm within our industry.

To quote Susan Credle, “we have to create cultures that allow us to be brave”.

It’s one thing to make good work, but it’s entirely another, to make work that does good. It was this meaningful work that took centre stage this year at Cannes. Gone are the days of ‘Cause-vertising’, it’s the work that “takes care of the purity of the issue”, according to Wieden+Kennedy co-president and CCO Colleen Decourcy, who spoke on a panel in a session called ‘Defining Art + Activism’. DeCourcy, accompanied by director Alfonso Cuarón, alongside Participant CEO David Linde, talked to Domestic Workers Alliance executive director Ai-jen Poo and shared the real impact of their academy award winning film ‘Roma’. Roma was “the beginning of the conversation – not the end” said DeCourcy, the work they created is merely the first chapter in their mission to cause hard legislative changes.

To witness the effects of world-changing work first-hand, and to see it recognised across so many categories, has left us determined to create positive change.

So, to all our young creative counterparts out there – be brave. Find the courage to back your ideas, believe that you can have an impact on the world and be ready to evolve.

While we’re stilling coming to terms with the sensory overload and emotional come-down of our week at the Young Lions Creative Academy, there’s one tiny thought that hasn’t quite left us:

“Maybe I could change the world.”

Cannes, it was such a privilege.