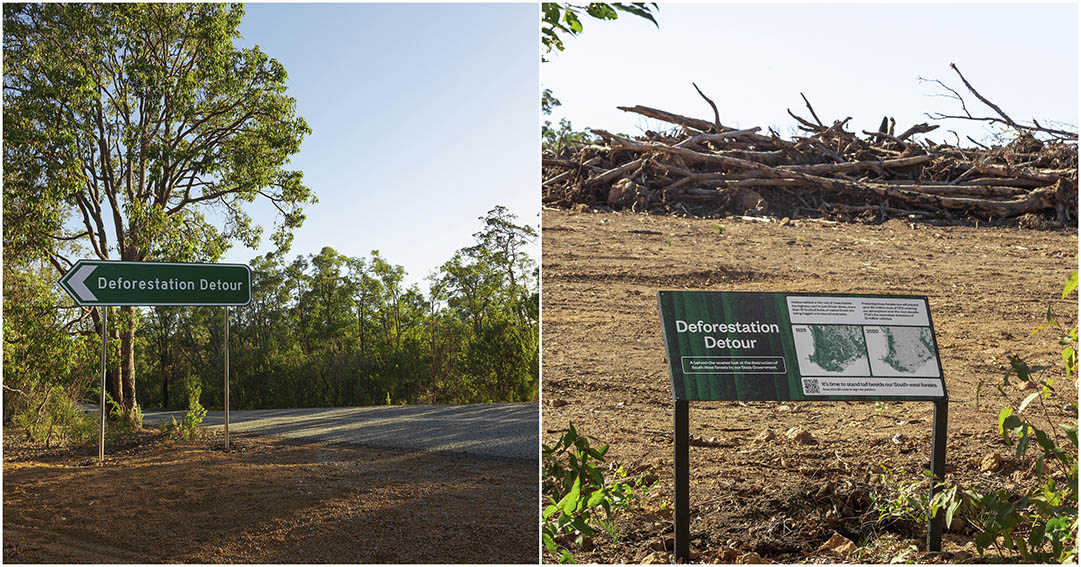 The majority of Western Australians aren’t aware that deforestation of native forests is happening locally because it’s being hidden along highways by a deliberate covering of trees.

On 30th of March, before the Easter long weekend rush from Perth to the South West region, a collective of art-directors, copywriters, filmmakers and artists known as Heavy Duty created the “Deforestation Detour” which saw a guerilla installation of a new road sign and informational park sign highlighting the deliberately hidden destruction of native forests in Australia’s South-West. The signs aim to give upcoming long-weekend travellers an up-close tour of the environmental destruction in Western Australia.

The informational park-style sign reads:
“A behind the scenes look at the destruction of South West forests by our State Government.”
“Hidden behind a thin veil of trees beside the highway, more than 10 football fields of native forests
are being logged and cleared everyday.”
“Protecting these forests now will prevent 60-million tons of CO2 entering our atmosphere over the
next decade. That’s the equivalent emissions of 12-million vehicles.” (Facts authenticated by Western Australian Forest Alliance)

The art collective said: “we can’t save, what can’t be seen”.

“Forests are one of our greatest defenses against climate change, and right now most Australians aren’t even aware that defense is weakening because it’s being deliberately hidden.”

“We feel Australians deserve to know what is happening, and we’d like to open this conversation to the public before it becomes irreversible”.

“We ask if you’re headed down south this weekend (or thereafter) to take a break from your drive, peek behind the curtains of trees and see these graveyards for yourselves. It’s indescribable, and surreal”.

“We’re asking the premier and our government to help out our future, and to review the current policy to safeguard our native trees. Our forests are worth more standing.”

Jess Beckerling, Convener of the West Australian Forest Alliance, said: “Too often, people drive through the magnificent Southern Forests region in WA, admiring the forest cathedral from the comfort of their car, completely unaware that beyond the 200m road buffer the ancient ecosystem is being flattened, clear-felled, and then burnt. We must spread the word that all native forests are worth more standing for local communities, economies, water, wildlife and climate.”

According to the West Australian Forest Alliance, 15% of the wood harvested from Native Karri Trees ends up being used as timber. The other 85% becomes wood chips. (Fact Sheet)

The informational park sign links a QR code that takes the user directly to the a West-Australian Forest Alliance website that allows you to contact the premier asking him to help protect forests by:
1. Correcting the definition of Old-Growth Forests so that all South-West Forests with Old-Growth structure and are ensured a protection.
2. Growing the farm forestry and plantation sector for timber, carbon storage, biodiversity and landcare in line with the Forests For Life plan
3. Making the next 10-year Forest Management Plan a plan for conservation, not logging.

Premier Mark Mcgowan has made an election promise “Ensuring that we protect WA’s unique natural environment and leave a positive environmental legacy for future generations is a key priority of my Government.”

Heavy Duty would like the Western Australian government to review the current policy alongside members of the West-Australian Forest Alliance. They believe we can find a new way to grow resources sustainably that doesn’t require tearing down native forests affecting the ecosystem around it and driving climate change to a faster pace.

The art collective acknowledges the Traditional Custodians of the land on which they live and work, the Whadjuk Nyoongar people of the Whajuk nation and pay their deepest respects to Elders past, present and emerging. They extend that respect to all Aboriginal and Torres Strait Islander peoples. They also acknowledge that sovereignty of these lands has never been ceded.