Nine has unveiled a selection of entries in its State of Originality competition as part of Game 1 of last night’s 2021 State of Origin series. Entrants include TBWA Adelaide / Wavemaker, Colenso BBDO, DDB Worldwide / OMD and Leo Burnett / Foundation.

The competition – the winner of which will take home the biggest prize in Australian advertising, with more than $1 million in advertising inventory up for grabs across Nine’s leading television, radio, digital and print assets – has South Australia Tourism, Google, McDonald’s and Bundaberg among the major brands who will be in mix for the much anticipated competition.

The four campaigns to be announced as entries in the competition are: a new commercial by SA Tourism entitled “For those who want a little more” entered by TBWA Adelaide / Wavemaker, Google, “Help” entered by Colenso BBDO NZ / PHD, McDonald’s, “End of Night NSW”, entered by DDB Worldwide / OMD; and Bundaberg “Australia’s most famous cocktail: Bundy and Cola”, entered by Leo Burnett / Foundation.

In each of the three State of Origin games, Nine will unveil new entries for the competition, which will be then be judged by a panel consisting of leading advertising communicators: Australia’s most awarded creative*, Tara Ford, CCO of The Monkeys; Ant White, CCO of newly minted agency Howatson+White; former adman, Gruen panellist and 3AW Breakfast co-host Russel Howcroft; and globally acclaimed disruptor, former CEO of BBH, founder of MakeLoveNotPorn and all-round advertising legend, Cindy Gallop.

When the final list of entries is unveiled at the end of State of Origin Game 3, Nine will open a public judging component, with 20 per cent of the voting going to votes cast via the Wide World of Sports website.

Says Liana Dubois Nine’s director of Powered: “We could not be happier with the ads that have entered our State of Originality. These first four ads highlight the incredible creativity that exists within Australian adland, and they have taken advantage of the unique platform that is the State of Origin to reach an audience of millions of Australians.

“Our goal in creating State of Originality is to drive new creativity and ensure the advertising on screen is as entertaining and engaging as the footy on the field.”

Entries remain open until Round 3 of the State of Origin go to stateoforiginality.com.au for more information. 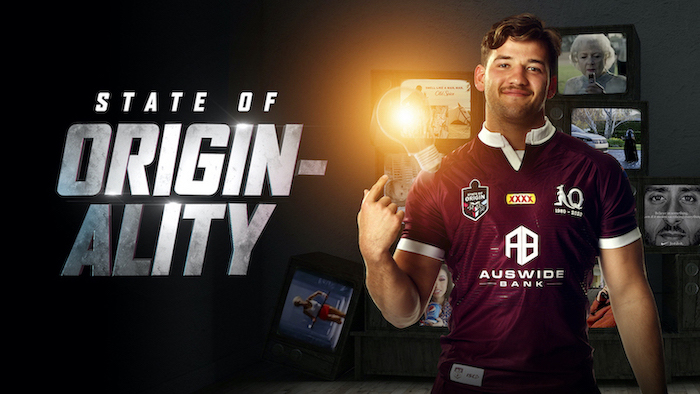