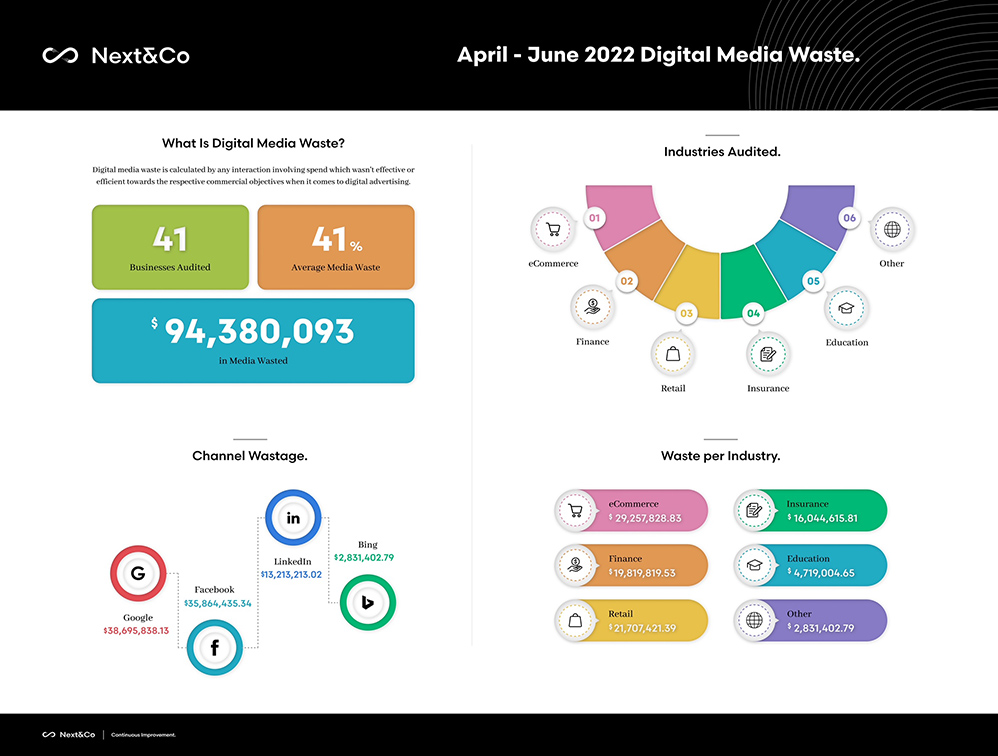 Despite rising digital advertising budgets post-pandemic, advertisers continue to waste their ad spend, tipping more than $94.3 million down the drain in the April to June 2022 quarter, according to the latest Next & Co Digital Media Wastage Report.

The wastage, which is an average of 41% of audited spend, is slightly down on last quarter’s metrics, which revealed a digital ad wastage figure of $134.4 million for January to March 2022.

In its latest report, Next & Co audited 41 companies with digital ad budgets of between $500,000 to $31 million across a mix of ASX-listed, multinational, national and SME companies.

Across digital media channels, the most digital ad Q2 ad spend was wasted on Google at $38 million, followed by Facebook ($35 million), LinkedIn ($13 million) and Bing ($2.8 million).

The figures come on the back of the release of Next&Co’s 2021 annual data, which showed a whopping $3 billion of digital ad spend wastage, representing the billions of dollars that failed to further digital advertising commercial objectives.

Next&Co Co-founder, John Vlasakakis, said: “Even though ad spend is at a recent industry high, it’s no reason for brands to become complacent in terms of where and how they spend their money. The digital ad wastage figures show brands are still struggling to adequately achieve dollar-for-dollar value on their digital ad spend, at a time when it’s more vital than ever to capture audience attention and ROI.

“We’ve now used our Prometheus technology to audit hundreds of brands across a range of sectors and all of them have revealed varying levels of ad spend wastage. It’s startling and really shows that now is the time for brands to look at their spending and their upcoming campaigns and focus on getting bang for their buck to really achieve results.”

Next&Co’s auditing platform Prometheus has now been used by more than 500 companies across Australia. It has the ability to tell advertisers exactly how much, and where, ad spend is being wasted on their digital platforms.

Prometheus has in-built KPIs advertisers, including leads, customer conversions, ROI, and reach, enabling brands to choose their targets across each metric. The auditing tool then determines the exact wastage of their total annual digital spend in dollars and where that wastage is occurring, campaign-by-campaign, and on a creative level.

It provides a score out of 100 on the overall performance of each metric and the exact dollar figure of ad spend wastage. The data is then individually audited for each type of advertising activity run within the tool and an individual score prepared for each.

Prometheus can also predict how many conversions advertisers could potentially achieve and make creative and CPA (cost per acquisition) improvement recommendations.