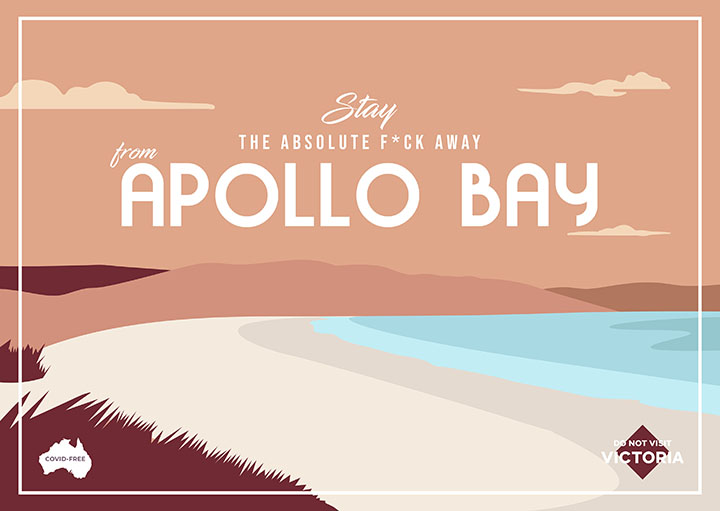 In the wake of Victoria’s second lockdown, and reports of significant numbers of Melburnians ignoring expert medical advice by fleeing to Regional Victoria, Melbourne creatives Guillermo Carvajal and Jess Wheeler thought of a way to try and drive home a message that many were failing to grasp.

They initially posted six digital postcards online, featuring locations such as Apollo Bay and Phillip Island, which at first glance appear as a regular postcard, but on closer inspection invite the viewer to ‘Experience picturesque Phillip Island on Google Streetview, you sh*theads’.

The response was immediate. And huge. The pair were inundated with messages from residents located all over Regional Victoria, with endless requests for versions for their own town. Unable to cater to every town, G & Jess took the 4 most requested towns and created a second set of 4 – making 10 in total.

The images continued to be shared widely across social media, starting a national conversation on the issue. And has since been discussed on print and radio by The Age and the ABC.

Says the pair: “This idea was really born out of the sheer volume of stories coming out of Regional Vic. That against a backdrop of ‘you must stay home’, towns were suddenly overrun with people from Melbourne breaking lockdown to stay in a holiday home or trying to shack up in a hotel and wait it out. These towns do not have the infrastructure to handle an outbreak. Right now, the best way to support these towns is to stay away until it’s safe to resume travel. We wanted to try and deliver this serious message in a light-hearted manner that was imminently shareable. Because the existing efforts were clearly not getting through.” 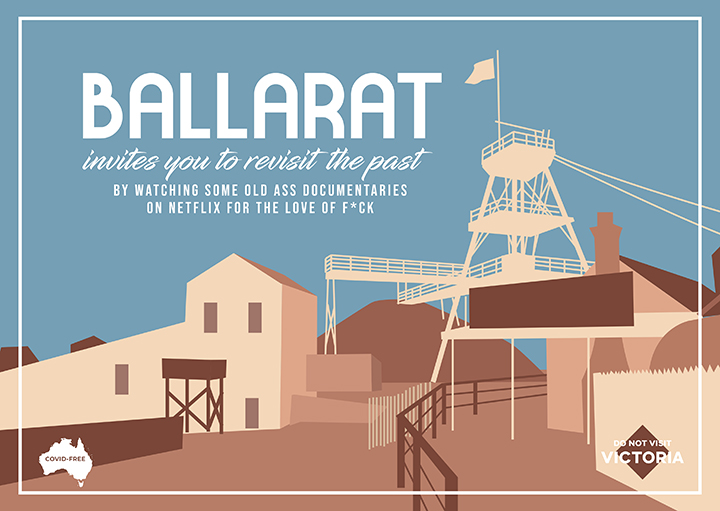 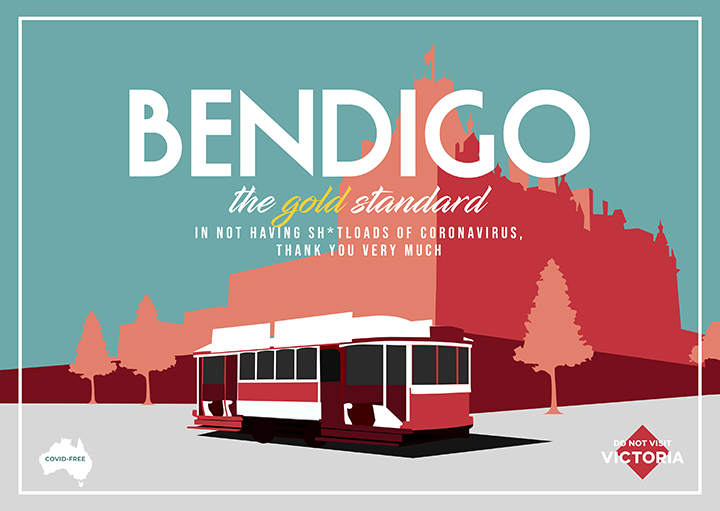 The pair continued: “While we understand this won’t be everyone’s cup of tea, and emotions are running high, we have been overwhelmed by the positive outreach from the people of Regional Vic. And once this is over we’d like to reimagine these images to invite everyone back.”

Due to popular demand, the guys have set up an online store where people can order the artwork on stickers, prints, mugs and towels. Any profit derived from these items will be directed to a charitable cause.