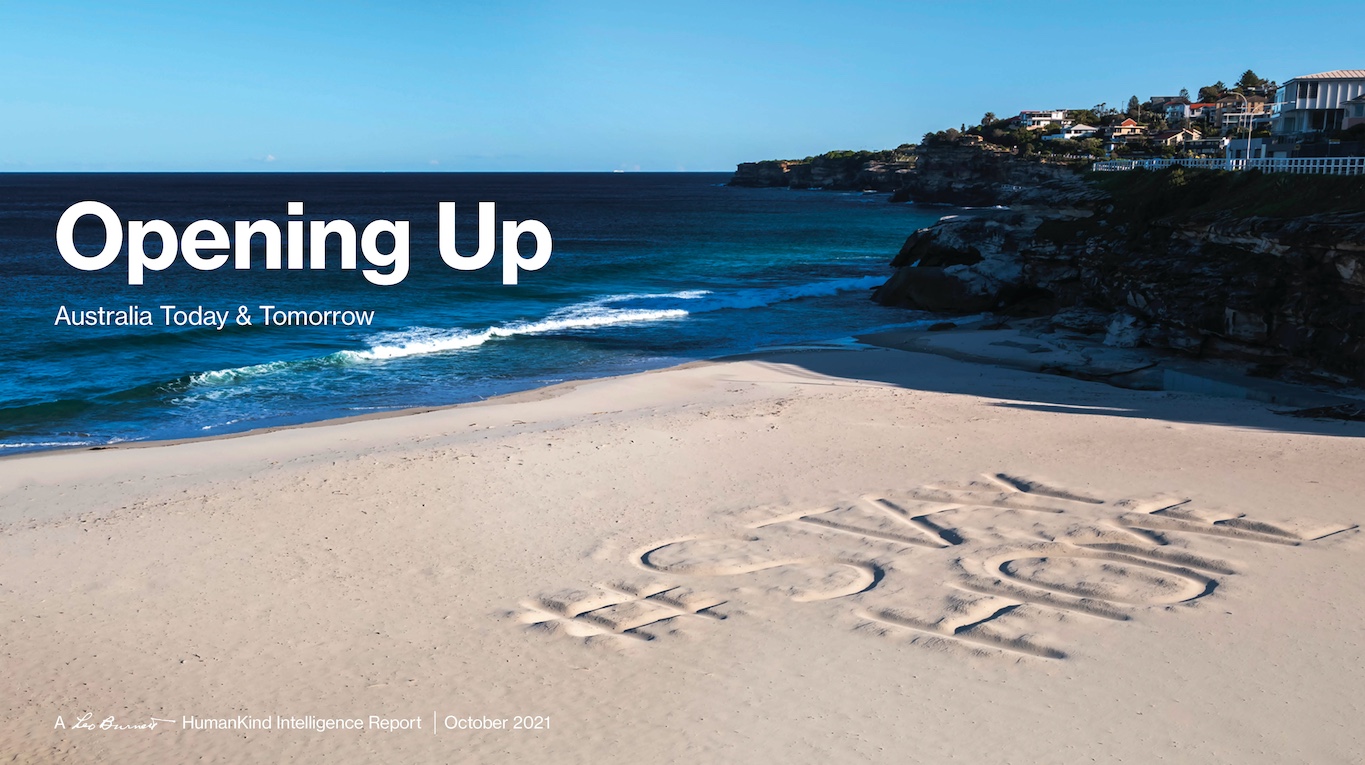 With COVID-19 restrictions ending in NSW, Leo Burnett has released ‘Opening Up: Australia Today & Tomorrow’, a detailed research report that uncovers how Australians are feeling about a return to ‘normal’ and how our attitudes and behaviours will shape the country moving forward.

The national quantitative survey* and 109-page report explores the cracks that have emerged throughout, or have been accelerated by the pandemic, and what this means for brands and businesses.

It reveals how there is no ‘one’ Australia, and that multiple fault lines have emerged between the states, the ‘haves’ and ‘have nots’, and between generations, also touching on the next potential health crisis – mental health.

Australians have been rattled, but are hopeful for a brighter tomorrow, the report reveals. The two most dominant emotions being experienced by people today are ‘hopeful’ and ‘anxious’. In this light, Australians are generally more optimistic about the future, with those in Greater Melbourne (59%) and Sydney’s LGAs of concern (69%) even more positive about the future than the rest of Australia (56%).

We may be witnessing the emergence of the ‘Lost Generation’. The report found that those aged 12 – 17 are feeling that they’ve missed out on life at a rate higher than the rest of the country (66% c.f., 57%).

The time for sentimentalism has passed and Australians are ready to act and laugh once more. Domestic travel (52%) and socialising more (45%) are highest on people’s list of activities they wish to return to in 2022. In terms of entertainment preferences, comedies (59%) are currently more salient with people than dramas (41%).

Despite the collective experience, our pandemic lessons have been profoundly personal. The report found that two-thirds of Australians agree ‘time’ has taken on increased significance during the pandemic, with people admitting the number one finding they learned about themselves was their level of ‘personal resilience’.

The year of action. Turning attention to what this means for brands, and the categories set to gain, Leo Burnett’s head of strategy, Graham Alvarez-Jarratt states after a protracted period of languishing, 2022 will be the year of action. He believes four modes will shape the contours of human behaviour in the coming months, each with their own type of action that will present an array of challenges and opportunities for brands. These include:

1. Making up for lost time – Australians will seek to (re)connect with what has been taken from them throughout the pandemic.

2. Revelling in the moment – people will seek out moments of indulgence and hedonism.

3. ‘A new me’ – this will see people shed the things they’ve learned to live without, and lean into the things that matter most to them.

4. A new world – people will be on a mission to get away from how things were and experiment with how things can be.

Says Alvarez-Jarratt: “It’s been more than 600 days since COVID-19 first arrived on our shores, and with it, rolling lockdowns, interruptions, and restrictions. Our study shows that Australians are, in response, craving a sense of momentum again.

“We’re seeing that people don’t necessarily want to go back to the way things were, and instead are ready to experiment with how things could be. The exciting part for brands is how they shift their behaviour, and better support people as they seek to create a world that better serves them.”