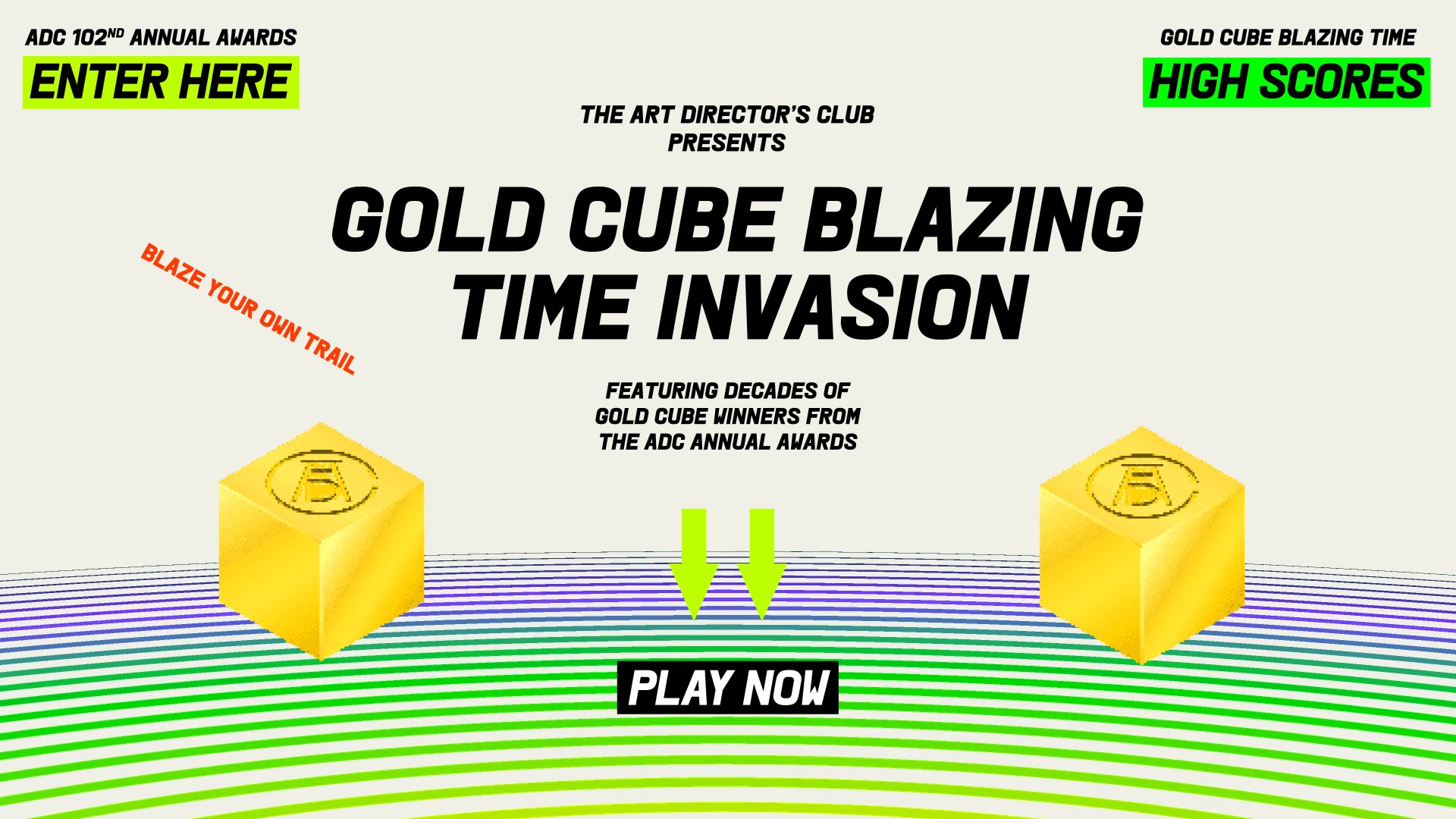 In an adventurous twist on typical call-for-entries campaigns, New York-based creative studio Karlssonwilker has developed a throwback arcade video game that showcases over a century of past winners and provides potential discounts for entries into this year’s ADC 102nd Annual Awards.

As one of the world’s longest running and most prestigious global advertising and design competitions, one clear point of difference of the ADC Annual Awards is its vast archive of winners dating back to 1920.  Karlssonwilker leveraged that unmatched legacy to create the ADC Gold Cube Blazing Time Invasion, a playful online experience that informs creatives of the great work of the past and incentivized them to enter this year’s competition.

It’s not all fun and games, though: the top scorer each week until the final deadline qualifies for a free entry into this year’s competition, and the four runners-up each week get a 50% discount on an entry.

Modeled after 1980s-style space shooter video game, ADC Gold Cube Blazing Time Invasion is a single-player shooter arcade game that pits players against generations of award-winning work from the ADC’s annual competition.  Players take the form of ADC’s iconic Gold Cube, and shoot blazing balls of fire at decades of winning work, clearing a path for themselves racking up points along the way.

The first level features winning work from the present decade, with each subsequent level working backward chronologically, ending with the 1920s.  The 11 increasingly difficult levels also feature a boss after each decade who tests player speed and accuracy.

While players lose if they fail to clear the work before it reaches the bottom of their screen, they do get to explore ADC’s award-winning work from the decade that bested them.  Players can submit their scores at the end, hopefully breaking into the top 10 on the leaderboard.

Says Hjalti Karlsson, co-founder and chief creative at Karlssonwilker, who is also serving on this year’s Brand/Communications Design jury: “When we think of ADC, we think of prestige, creative prowess, and the thousands of award-winning works throughout its 100+ year history. For this year’s call for entries campaign, we wanted participants to grasp this impressive legacy of their fellow creatives, and feel emboldened to add their work to the conversation amongst the very best.”

Says Jan Wilker, partner, creative director, Karlssonwilker: “The arcade game format and visuals offer a playful world where we could add a bit of irreverence and edge. We want to remind creatives how a spirit of competition and community in the industry has led to such excellence over the last century, and motivate them to enter for 2023.”

ADC 102nd Annual Awards entries can be submitted now, with fees increasing after each deadline period.  Regular deadline is January 27, 2023, with extended deadline of February 17, 2023, and final deadline March 3, 2023.

Entries will be judged by a diverse global jury of more than 250 top creatives from 48 countries.  Judging will be conducted in March 2023, with finalists announced in May.  ADC 102nd Annual Awards Gold, Silver and Bronze Cube winners will be announced during Creative Week in May 2023.

New for this year’s competition:

A special tiered pricing structure makes it easier for smaller agencies, studios and freelancers to participate in the ADC 102nd Annual Awards.  Larger agencies and brands pay the standard entry fee; smaller shops get a discount on entries (amount varies by discipline), and freelance creatives and one-person shops are eligible for an even greater reduction in their entry fee.

This year also sees ADC’s continued partnership with creative community Working Not Working on content collaborations, the special Freelancer of the Year award, and ADC Members’ Choice Award, where freelance members of both The One Club and Working Not Working are invited to cast votes for their favorite entry amongst the year’s top-scoring works in all ADC Design disciplines.