Who has scored the most goals in international football? The internet will generally tell you it’s Cristiano Ronaldo, when it’s actually women’s footballer, Christine Sinclair. The inconsistency of searchable facts that disadvantages sportswomen is behind a global campaign developed by DDB Aotearoa. Correct The Internet is the collective work of an international group of like-minded people that seeks to highlight and correct inaccuracies in internet search results and make sportswomen more visible as a result.

One of its founding partners is Rebecca Sowden, former New Zealand Football Fern and owner of international women’s sports marketing and sponsorship consultancy, Team Heroine, which is a member of the United Nations’ Football for the Goals*.

Rebecca Sowden says she is passionate about helping the world recognise all sporting heroes and empower the next generation of sportswomen: “Many of the world’s leading athletes are women. Many of the world’s sporting records are held by women. But when people search online for factual sporting information about athletes, the results favour the sportsmen, even when the sportswomen have greater statistics.”

Says Paul Spain, futurist and CEO, Gorilla Technology: “Search engine algorithms draw on human created content, designed to give us what we are looking for, instantly. Because search engines take so much notice of what is made popular by major publishers, social media platforms and content creators, search results will reflect certain peoples or organisations inherent preferences. This can lead to biased search results that include information that is not factually correct.” 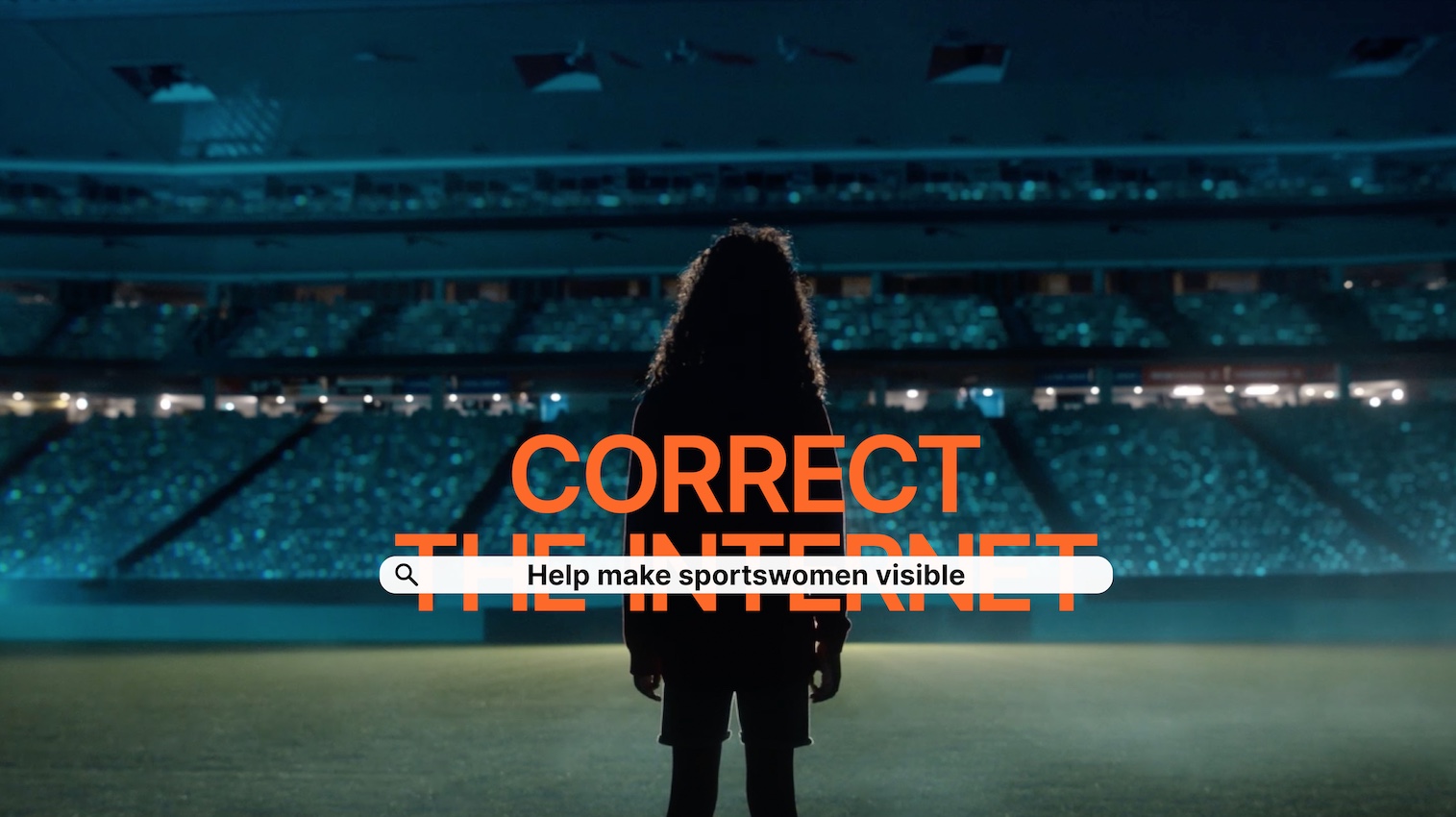 Says Brown: “The only way to correct the algorithm is through the power of the people and Correct The Internet wants to empower people to help ensure accurate information is delivered to all of us. Let’s do this for future sports people everywhere.”

It’s a view echoed by Meikayla Moore: “This campaign is prefaced on not continuing to pitch women against men, but to correct and highlight incorrect searchable facts that have lacked consistency and accuracy leading to disadvantages for sportswomen across the globe.

“I feel it’s important for those that have achieved these amazing statistics but also for all those witnessing such brilliance. Women are heroes, let’s recognise them for it and remove learnt bias, empowering and inspiring the next generation.”

With its aim to empower women through the power of sport, Correct The Internet has garnered the support of Football for the Goals (FFTG), a United Nations initiative that provides a platform for the global football community to engage with and advocate for the Sustainable Development Goals (SDGs), Goal 5 of which aims to achieve gender equality and empower all women and girls. 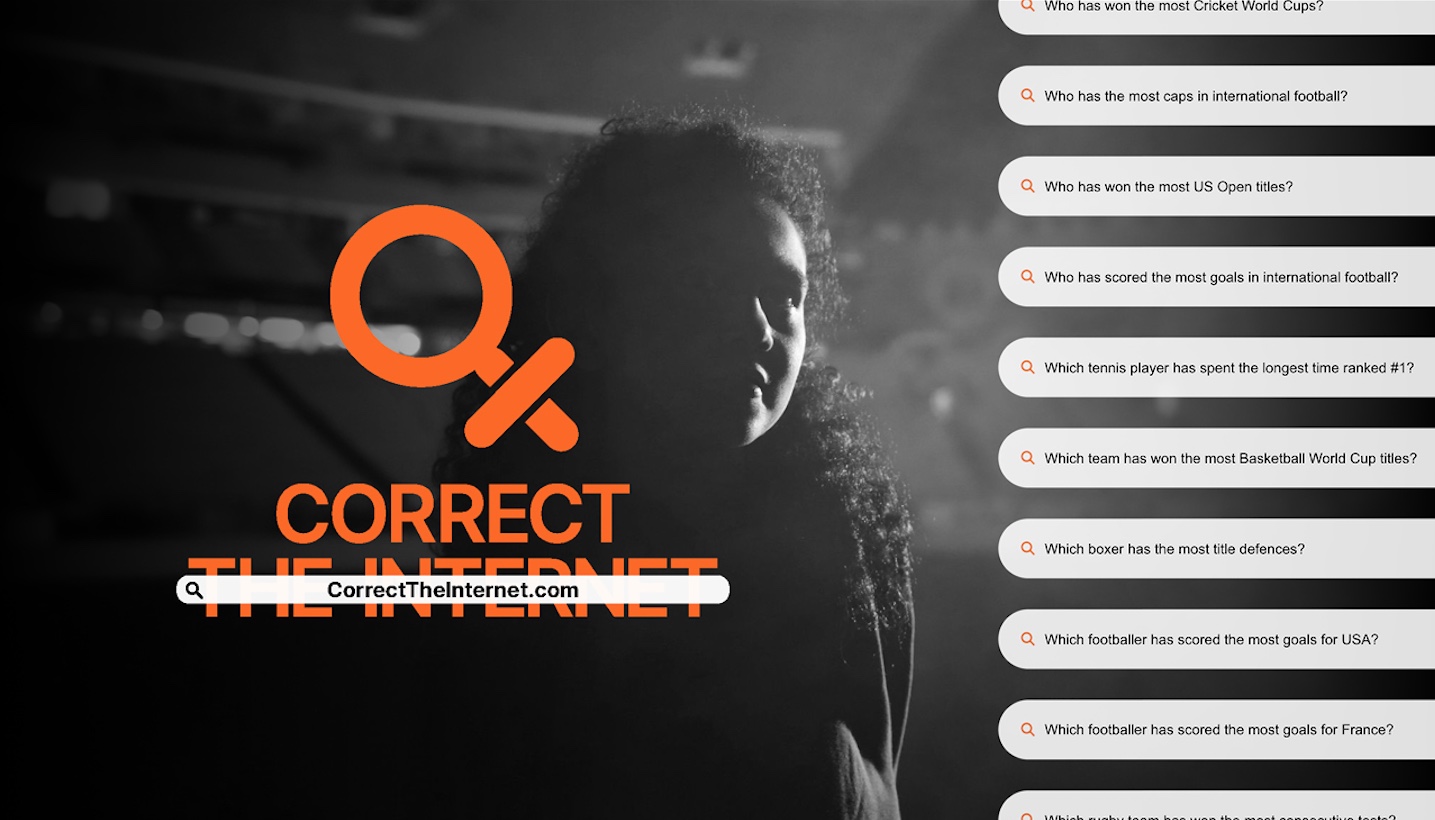 Says Maher Nasser, director of the Outreach Division of the UN’s Department of Global Communications: “With growing reliance on internet search engines to find information, algorithms assume that human biases, conscious and unconscious, are the natural order of things and elevate results that conform with that. Gender equality starts with recognizing the biases and challenges faced by women and girls and campaigns like Correct The Internet are a great way to unmask how the same biases have entered the virtual world.”

Women in Sport Aotearoa has also got behind the cause. Acting chief executive, Nicky van den Bos says: “There couldn’t be a better time for this campaign, with women’s sport in the spotlight more than ever before. The 2022 ICC Women’s Cricket World Cup and the Black Ferns performance in the Rugby World Cup last year, and this year’s FIFA Football Women’s World Cup in New Zealand means internet searches may just be at an all-time high.  Let’s ensure the results reflect the facts, not historic biases.”

Says Sowden: “Because the internet has learnt our bias many of its search engine results are inconsistent, often favouring men, and change depending on who is searching. Our goal is to empower the next generation of sportswomen by ensuring that when women are the best in the world, the internet reflects that.”

There’s no easy way to correct the inconsistencies in search results. However, if people report these issues using each search engine’s inbuilt feedback function, they can be logged and fixed. The problem is, most people aren’t familiar with the feedback function, and recent design changes on some of the larger search engines make it harder to find.

The team behind Correct The Internet has already identified numerous factual inconsistencies and has created a tool that makes sending feedback easy for anyone to execute with just a couple of clicks.

Correct The Internet officially launches this Saturday 21 January at the NZ Football Ferns game against the USA women’s team at Eden Park with the campaign film shown to the attendees.

Some of the incorrect facts:

Q: Who has scored the most goals in international football?
A:  The internet says Cristiano Ronaldo with 118 goals
The stats say: CHRISTINE SINCLAIR with 190 (Canada)

Q:  Which tennis player has spent the longest time ranked number 1?
A:  The internet says Novak Djokovic with 373 weeks
The stats say: STEFFI GRAF with 377 (Germany)

Q: Which team has won the most Basketball World Cup titles?
A: The internet says United States/Yugoslavia with 5 titles each
The stats say: THE USA WOMEN’S TEAM with 11 (US)

Q: Who has scored the most tries in rugby world cups?
A: The internet says BRYAN HABANA and JONAH LOMU with 15 tries each
The stats say: PORTIA WOODMAN (NZ) with 20 tries

Q: Which New Zealand golfer has won the most majors?
A: The internet says MICHAEL CAMPBELL and BOB CHARLES with 1 major each
The stats say: LYDIA KO with 2 majors

Q: Which footballer has scored the most goals for USA?
A: The internet says CLINT DEMPSEY and LANDON DONOVAN with 57 goals each
The stats say: ABBY WAMBACH with 184 goals

Q: Who is the youngest footballer to play in a world cup final?
A: The internet says PELÉ 17yrs, 249 days
The stats say: BIRGIT PRINZ: 17yrs, 239 days

Disclaimer: The above reflects search engine results as of the date of this media release, however, as mentioned, internet results are inconsistent and can change depending on who is searching.

Team Heroine is a women’s sport marketing and sponsorship consultancy founded by former New Zealand Football Fern and Correct The Internet Founding Partner, Rebecca Sowden. Launched just after the last FIFA Women’s World Cup in 2019, Team Heroine works with brands and rights holders to unleash the power of women’s sport. Clients have included VISA Europe, Xero, Sport New Zealand and Spark Sport, and is a member of the United Nations’ Football for the Goals.

*Football for the Goals https://www.un.org/en/footballforthegoals is a United Nations initiative that provides a platform for the global football community to engage with and advocate for the UN’s Sustainable Development Goals (https://sdgs.un.org/goals). The fifth goal focuses on the achievement of gender equality and the empowerment of all women and girls.  Innovation and technology have been highlighted as a tool for helping achieving gender equality and is the theme for the United Nation’s 2023 International Women’s Day on 8 March.

WISPA was established by 22 Foundation Members – made up of senior women from across sport, business, government, and academia – and launched on UN International Women’s Day 2017. Its strategic vision is to see ‘women and girls valued, visible and influential in sport and recreation’.

Team Heroine | Supporter of Football For the Goals: Rebecca Sowden