2020 will forever be known as the year that changed us all. While we’re excited to close the door on 2020 and head into 2021, we want to share some of the ways people used Facebook’s family of apps to make this year less lonely, and a bit more meaningful. No matter where in Australia or the world you live, the shared experiences of 2020 brought us together, even while we were apart. Today’s Year in Review gives a glimpse into some of those moments.

This year, six key themes help curate the major moments which have shaped our communities and how we engaged with one another. 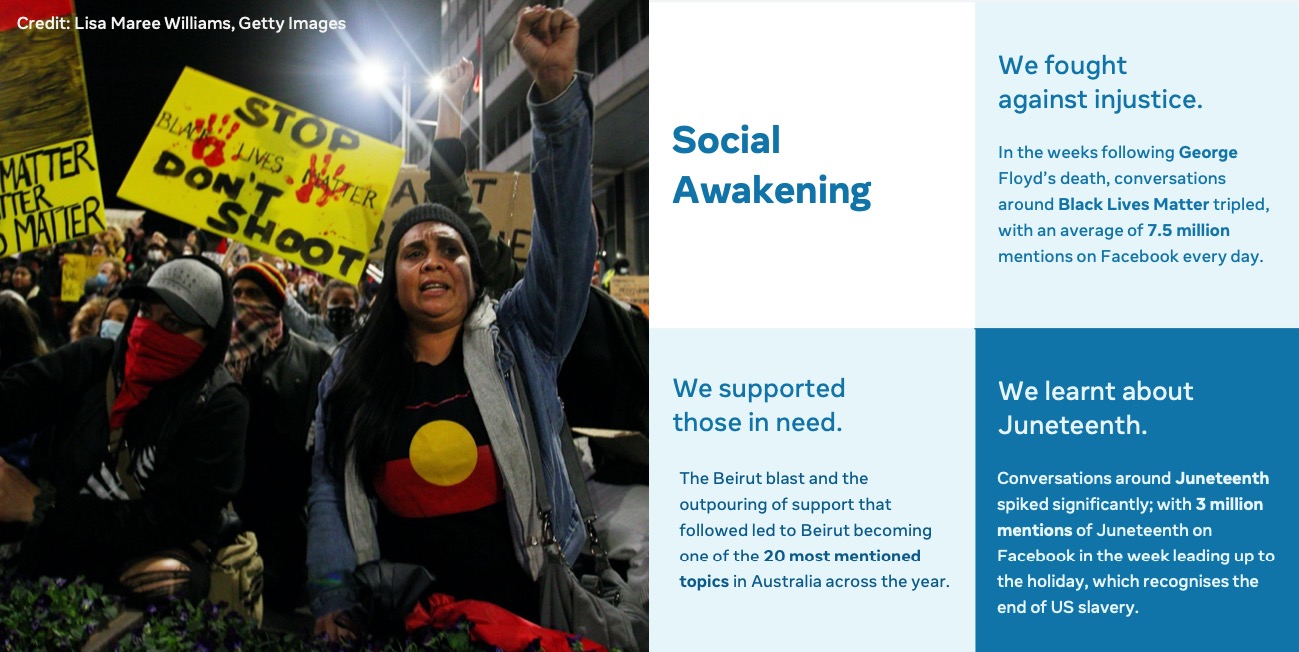 Social Awakening: Across 2020, the global community shared important issues that mattered to them more than ever before. Racial and social injustices, domestic violence, and LGBTQI+ advocacy were all widely discussed.
– In the three weeks following George Floyd’s death, conversations around Black Lives Matter tripled, with an average of 7.5 million mentions on Facebook every day.
– We also saw pressure mounting for companies in the US to observe Juneteenth as a holiday, in recognition of the end of US slavery. Australians watched on with interest. Conversations around Juneteenth spiked significantly, with 3 million mentions of Juneteenth on Facebook in the week leading up to the date.
– The Beirut blast and the outpouring of support that followed led to Beirut becoming one of the 20 most mentioned topics in Australia across the year.

Faith & Community: People used Facebook’s platforms to build and maintain community, even at distance.
– With more than 2.2 million members, View from my window became a top group in 2020 to connect people worldwide. In Australia, bear hunts also caught on as a way to signal friendliness and warmth in our neighbourhoods, with the We’re Going On A Bear Hunt Australia group attracting 19,500 members.
– The Kindness Pandemic group, started by Australia’s Dr Catherine Barrett, also became one of the fastest-growing Facebook groups of the year, with more than 562,000 members.
– In-person services were put on hold due to COVID-19 lockdowns; meaning the holiday week of April 6 (Easter and Passover) became the biggest for group video calls on Messenger and the most significant week of live broadcasts from Spiritual Pages, ever.
– WhatsApp saw a significant spike in video calling in late May due to the conclusion of Ramadan.
– More than 15 million Australians said they were members of active Facebook Groups*
– More than 10 million people on Facebook joined new groups created since March to support local businesses.
– More than 200 million businesses used our free tools globally to find new customers.

COVID-19: Under extraordinary circumstances, communities found ways to connect, learn, and grow.
– When COVID hit, people turned to critical platforms like Messenger and WhatsApp to stay connected, and we saw engagement surge around the world. Calling more than doubled for Messenger and WhatsApp in places around the world.
– We saw the most significant increases in Messenger usage across group calls; 70% more people participated in group video calls, and time in group video calls doubled globally, week-over-week in March.
– Instagram and Facebook Live views doubled in Italy when lockdowns hit, as residents sang on balconies and broadcasted under quarantine. Meanwhile, in the US, Facebook Live viewership jumped 50%, with many tuning into fitness classes, connecting with artists, and more.

Global Politics: With stakes high, people came to Facebook’s platforms to make their voices heard.
– The US strike on Iran’s General, Qasem Soleimani was among the top 8 most discussed moments for Australians on our platforms.
– Kamala Harris’ Vice Presidential selection announcement was the most mentioned moment in August, drawing more than 10 million posts in one day.

Icons: People came to Facebook to commemorate the figures who left a lasting legacy around the world.
– Kobe Bryant’s tragic passing was the #1 most discussed moment on Facebook.
– Ruth Bader Ginsburg a feminist icon, was commemorated in more than 5 million posts across Facebook and Instagram, often using the hashtag #restinpower.
– Chadwick Boseman’s sudden death hit especially hard this year, given his performance in Black Panther in a year with a heavy focus on racial equality.
– Posts celebrating the lives of Kenny Rogers, Eddie Van Halen, Kirk Douglas, Jerry Stiller, Dean Jones, Vera Lynn, Helen Reddy, Bill Withers, Terry Jones, and Little Richard were also among the most popular topics of the year.

Environmental Issues: Across 2020, our global community truly came together to build a better world.
– Bushfires across Australia were a central focus of Facebook fundraisers.
– The #1 fundraiser of 2020, led by Celeste Barber, raised more than AU $51 million towards relief efforts for the NSW Rural Fire Service.
– More than 2.5 million people, across 75 countries, contributed to over 19,000 fundraisers associated with the cause
– Over 100 bushfire related Facebook Groups were created
– Tens of thousands of Australians used Safety Check
– To date, people have raised more than AU $100 million through Facebook Fundraisers this year to combat climate change, promote ocean clean up, animal protection efforts, and many more.

Says Mia Garlick, director of policy, Facebook Australia and New Zealand: “Today we are revealing our 2020 Year in Review, highlighting the top themes and moments in time across Facebook Australia. The data reveals the instances across the year that were most talked about, celebrated, and commiserated. These are the occasions that started out as conversations and turned into cultural moments, spotlighting the many ways that people came together and connected on our platforms.

“2020 has undoubtedly been a tough year for many Australians, with fires, floods, and COVID-19 all leaving their mark. As physical distancing became the norm, we came together online – seeking out ways to form connections, celebrate cultural milestones, and give back to important causes. People used Facebook Inc. platforms in meaningful ways to connect with their communities and the people they love most. This really shows in the generosity we saw through fundraisers, small business support initiatives, and the number of groups created throughout the pandemic.”

Methodology:
The top themes for this year’s Year in Review were determined by looking at the top 20 moments of the year, and identifying commonalities across those moments and the ways people used different product features and tools, such as Fundraisers and Groups. The top moments of this year’s Year in Review were determined by combining the top single-day moments throughout the year with the top ways people used Facebook to come together around these moments. Data reflects Facebook’s apps activity from January 1 to October 31, 2020.

*Survey commissioned in partnership with YouGov – Facebook surveyed over 15,000 respondents across fifteen countries.