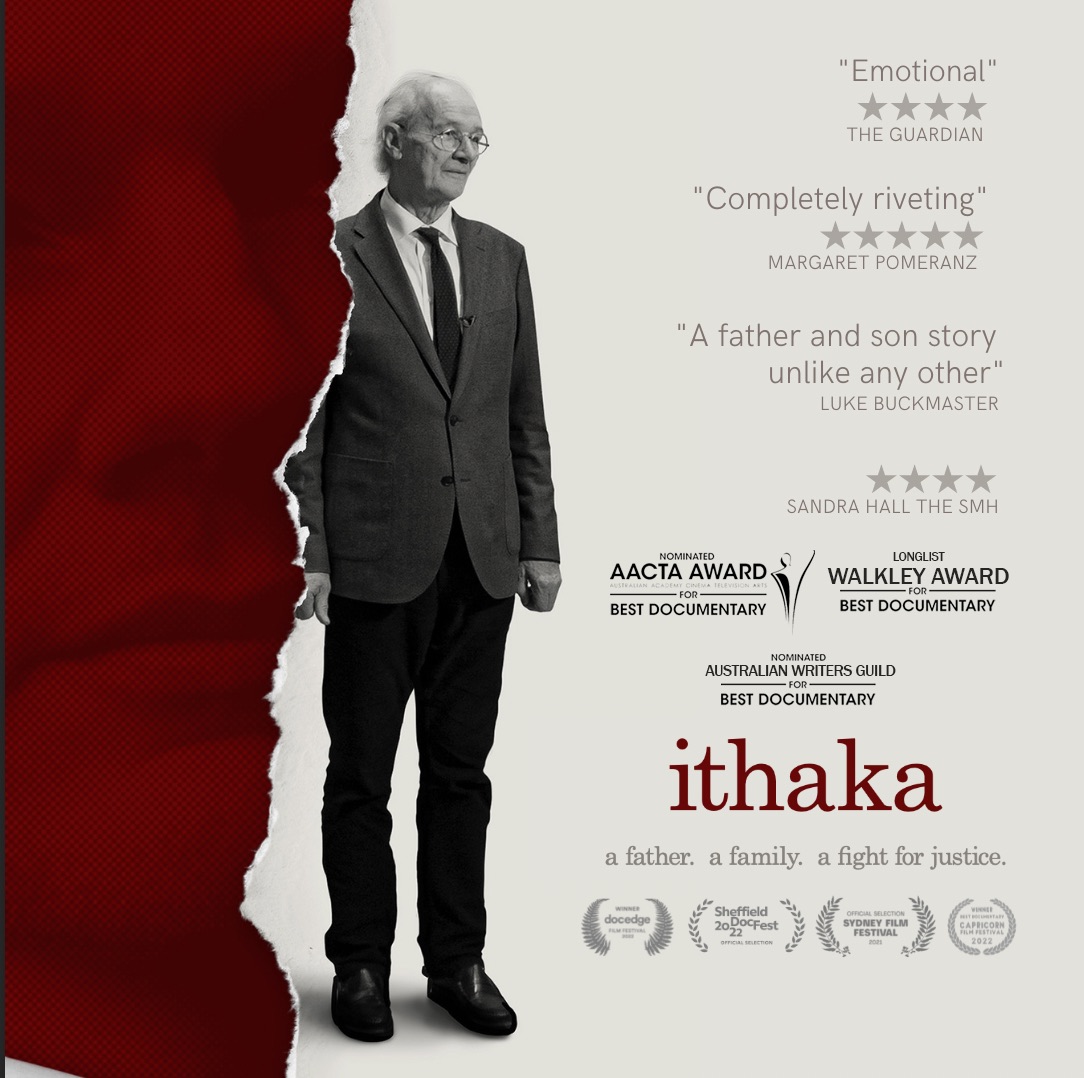 Exit commercials and documentary director, Ben Lawrence, has just returned to Australia from the project of a lifetime. Lawrence wrote and directed the documentary film, “Ithaka”, the story that follows the harrowing journey around the globe of John Shipton, Julian Assange’s father, and his advocacy for his son in the face of legal battles and media glare. Adding to the emotional and legal challenges was Covid. Lawrence’s work began in 2020. Its most intense work period was 2021.

The film has already been applauded throughout the world. It was the opening night film at the Berlin Human Rights Film Festival. It screened in the European Parliament in the National Palace in Mexico at the request of the president on Mexican Independence Day. It is longlisted for Best Documentary at the Walkley Awards, nominated at the Australian Writers Guild, AACTA Awards and Sydney Film Festival. And Lawrence has won two Best Director awards so far.

The ABC commissioned an Australian version of the film.

Lawrence was invited by Julian Assange’s brother, Gabriel, to make the film – a David-and- Goliath struggle that was intensely personal for his father and life or death for his brother. With Julian’s health declining in a maximum-security prison, the film was also urgent.

Says Lawrence: “I was interested straight away. Gabriel had visited Julian not long after he was taken from the Ecuadorian embassy in London, and he felt that the situation was dire he might never see his brother again. Gabriel is a filmmaker and he wondered what he could do. I was on a plane to London within a month.”

It was a test for filmmaking. Says Lawrence: “When a family is in that kind of crisis and you’re spending a great deal of time with them, it can get intense. We were all living together in London during lockdown. We formed our own bubble, which creates its own kind of intimacy or claustrophobia, whatever you want to call it, but also closeness. We were able to share things you might not in a traditional sense.”

It was very much a family film. As well as Lawrence and his cinematographer, there were just Gabriel and Julian’s fiancée (now his wife) Stella. (Adrian Devant, Stella’s brother coproduced)

Says Lawrence: “I wouldn’t have got the access I did otherwise. We hear Julian talking on the phone. I saw first-hand what the family was going through, not only the court case, but also when revelations that the family were being surveilled by the CIA were coming out. It was difficult to film also because of everyone’s emotional stress. The people close to him didn’t, and still don’t, know what is going to happen to him.”

Lawrence will make a brief trip to New York in November with the film but otherwise he is back on board at Exit.

Says Lawrence: “I cut my teeth in commercials and the knowledge I gained in them is the backbone of my documentaries.”

Says Lawrence: “The experience of going into a person’s home or business trying to understand the personal perspective of a brand, the story of a client, a customer or people’s experience is something that I really love. Real world stories fascinate me.”

Says Leah Churchill-Brown, executive producer, Exit: “Ben has an instinctive understanding of emotion. He is able to capture those small, very relatable moments that enrich a story and make it meaningful for audiences. It comes from more than experience, of which he has plenty. It is an innate talent.”