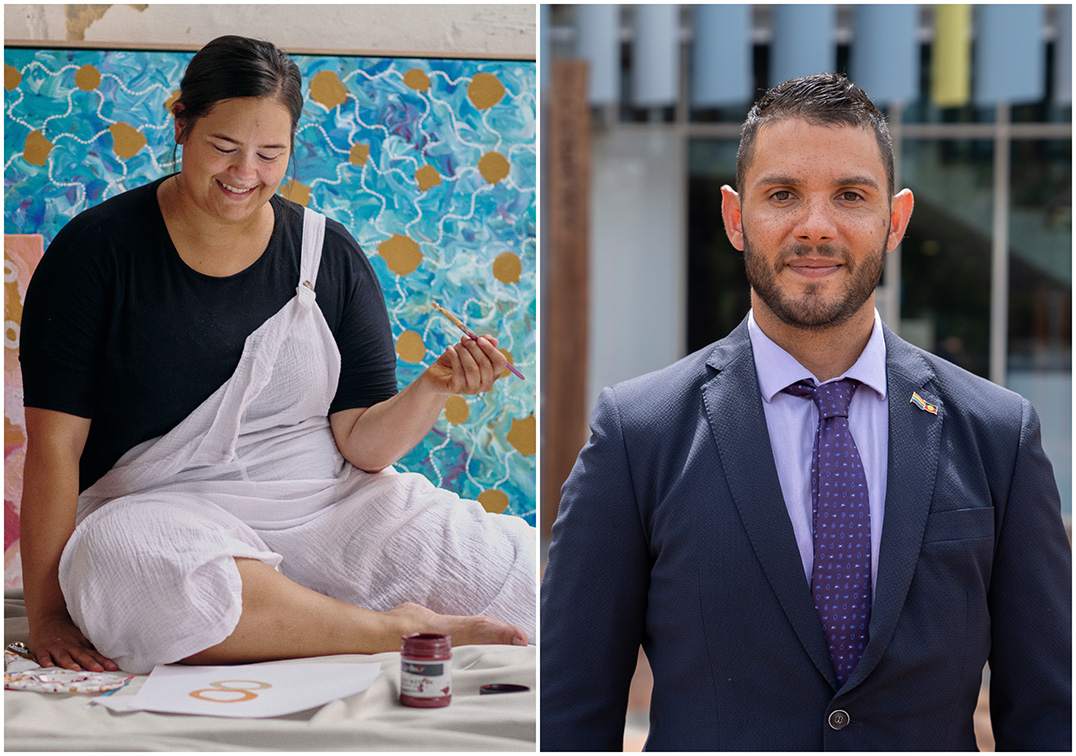 As a celebration of Aboriginal and Torres Strait Islander culture and educational excellence, the special digital wordmark was created by local Whadjuk, Ballardong and Yuat artist, Jarni McGuire, as part of ECU City’s broader placemaking visual program, and will be displayed during the new campus’ construction phase.

The artistic wordmark tells an ancient story of people and place. It conveys a shared sense of history and speaks to the transformation of Perth – known as Boorloo by the Noongar people.

The digital artwork also signifies the contribution of two historical female figures whose legacies have left a lasting impact on Western Australia and ECU – Fanny Balbuk and Edith Cowan herself.

Fanny Balbuk Yooreel was a prominent Noongar woman. She was a leader and visionary who walked Perth’s lakes system to advocate for the land rights of her people, including traversing the area around the ECU City site.

ECU’s namesake, Edith Dircksey Cowan, was the first woman to be elected to an Australian parliament and a renowned leader in social reform to improve the rights of women and children.

Together, the contribution of these two trailblazing women will sit at the heart of the vision for the new campus, as a place where history is shared and futures are created.

ECU City will be a state-of-the-art creative industries, business and technology campus that will reshape the Perth CBD and redefine higher education as Perth’s first comprehensive inner-city university campus.

The artwork is part of ECU City’s transitional communications program – developed to sit alongside the University’s existing brand identity, and specific to the city campus development until its completion in late 2025. 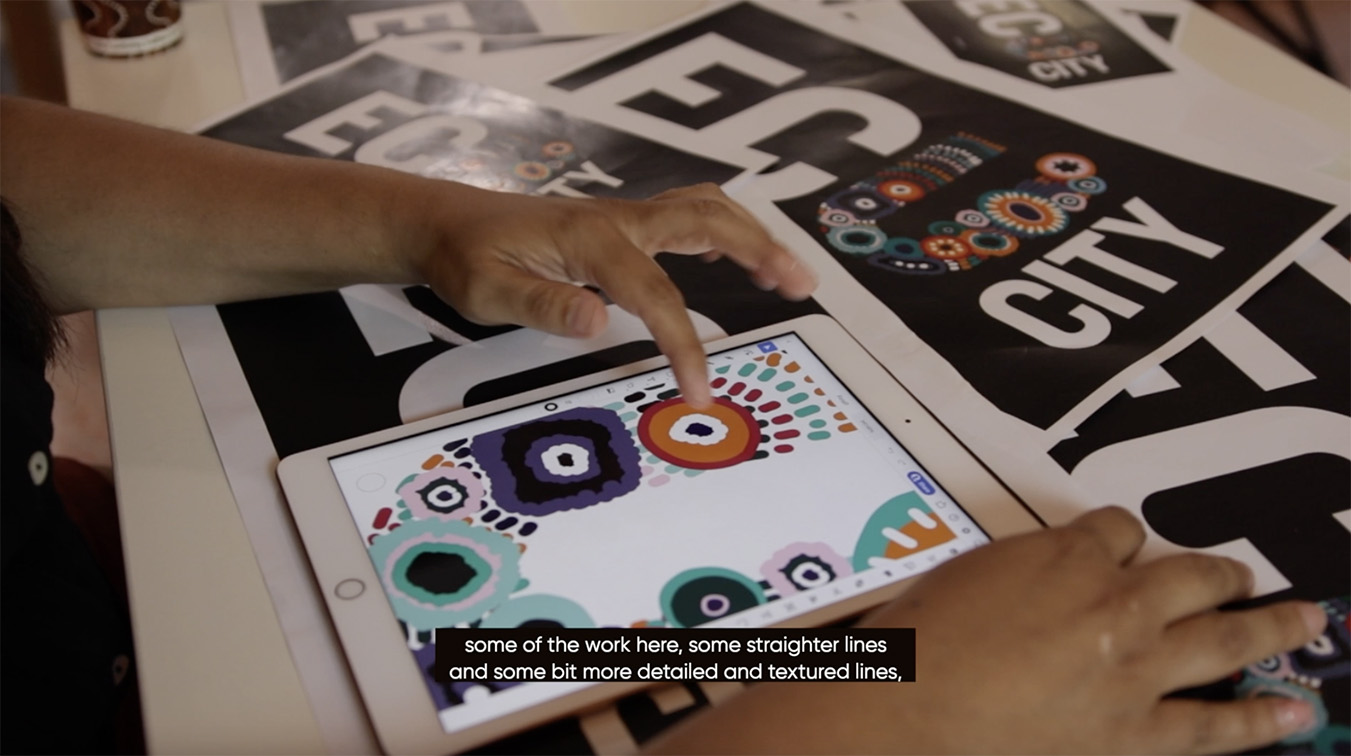 Federal Infrastructure, Transport, Regional Development and Local Government Minister, Catherine King, said: “The Australian Government is proud to be a major contributor to this project, with the new campus set to transform Perth’s CBD, attracting a vibrant student community and stimulating the local and regional economy.

“This is another exciting milestone for the project, which will unlock opportunities, provide an extensive range of educational opportunities, and bring excitement and people to the heart of the state’s capital.

“I’m pleased to see that this new inner-city ECU campus is honouring outstanding women leaders, and placing First Nations culture and history at the heart of its vision.”

Rita Saffioti, WA Transport, Planning and Ports Minister, said: “The State Government is proud to be investing nearly $200 million towards the ECU City project which will bring thousands of students and staff into Perth and Northbridge daily, and deliver a major boost for the local economy and businesses.

“This artwork celebrates the culture of our local Indigenous people and recognises the importance of the land where the campus will be located.

Federal Member for Perth, Patrick Gorman, said: “It’s significant that Perth’s new inner-city university campus should make this recognition of the rich First Nations history and culture that has shaped its location.

“The Noongar Culture wordmark will serve as a symbolic reflection of culture embedded in a modern learning facility.

“As a bastion of learning into the future, I am glad to see the ECU Perth campus will recognise the cultural importance of the land on which it is located.”

ECU Deputy Vice Chancellor (Students, Equity and Indigenous) Professor, Braden Hill (pictured right), said: “The new wordmark pays respect to the past while symbolising the University’s vision for the future.

“The vibrant piece reflects ECU’s transformation as a young and modern university while recognising that ECU City will be established on one of the world’s oldest learning places.

“It also represents the crossing of cultural paths of many nations and communities coming together to learn and exchange knowledge at ECU City, which echoes how the Whadjuk Noongar people have related to this place for thousands of years.

“This is an important part of the comprehensive ways in which we are honouring Indigenous knowledge and peoples in the development of our new city campus.

“ECU is proud to develop its new campus in an area that holds great significance. Both Fanny Balbuk and Edith Cowan were champions of social justice, and our new campus will honour their legacies.”

Jarni McGuire (pictured left), Whadjuk, Ballardong and Yuat artist, said: “My design takes inspiration from the people and natural landscape of the area and in particular, the women who have left their legacy.

“I really wanted this piece to represent a bidee – a journey or a pathway that students go through where they blossom to come out the other end.

“I also wanted this piece to talk about the lake system that was here before settlement. Lake Goologoolup, which is where the new ECU City Campus will be based, is relevant to Fanny Balbuk’s story and her bidee and how she walked from Matagarup to this lake.

“The texture, colours and circles represent the flora and fauna and the 14 Noongar groups of the place. I really wanted to encompass the whole picture and story of that place in this piece.

“Overall I wanted this piece to represent the strength and resilience of Fanny Balbuk and Edith Cowan, but also the strength of my community. I really wanted it to be something they were proud of and that they saw themselves in.” 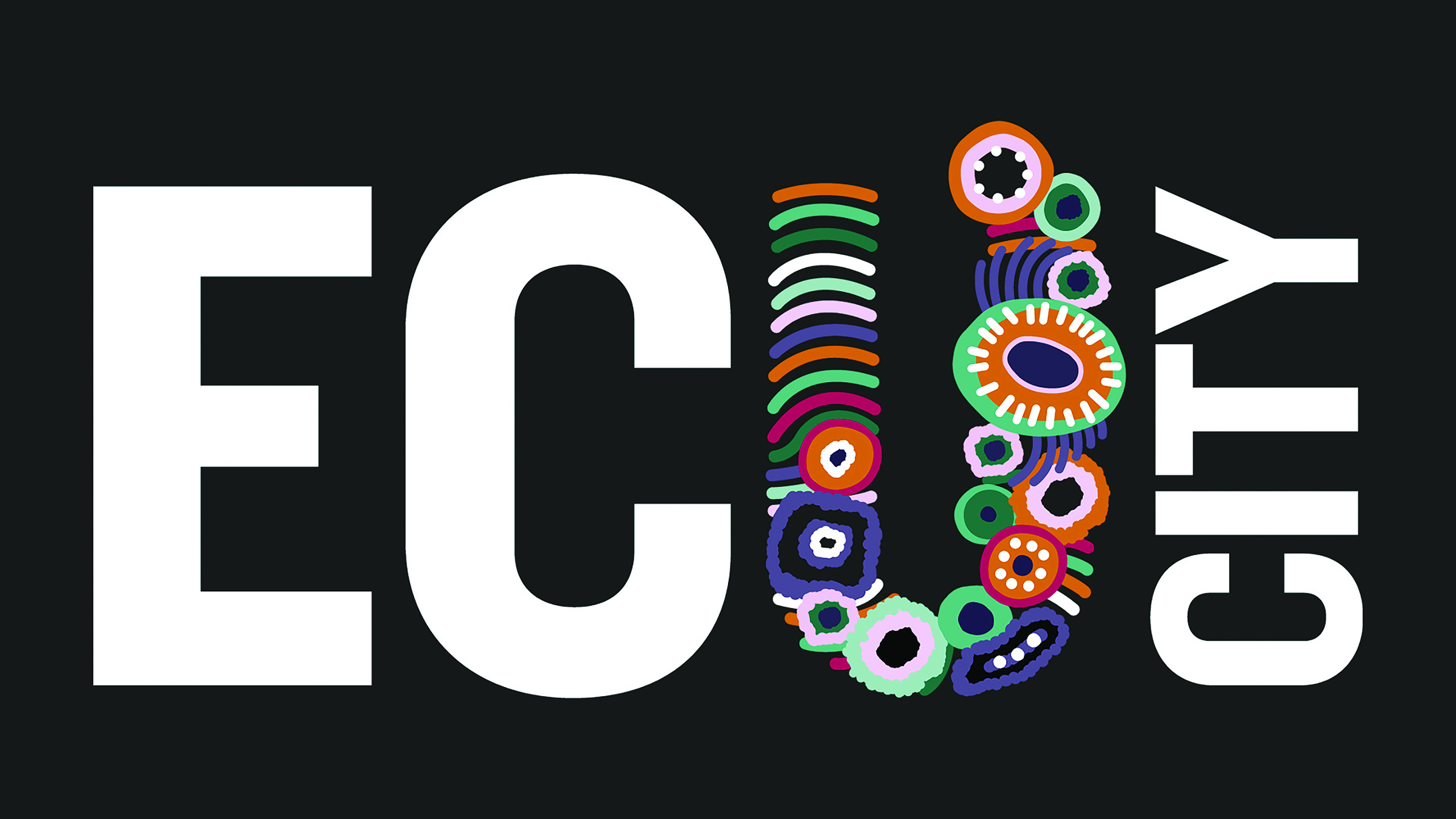