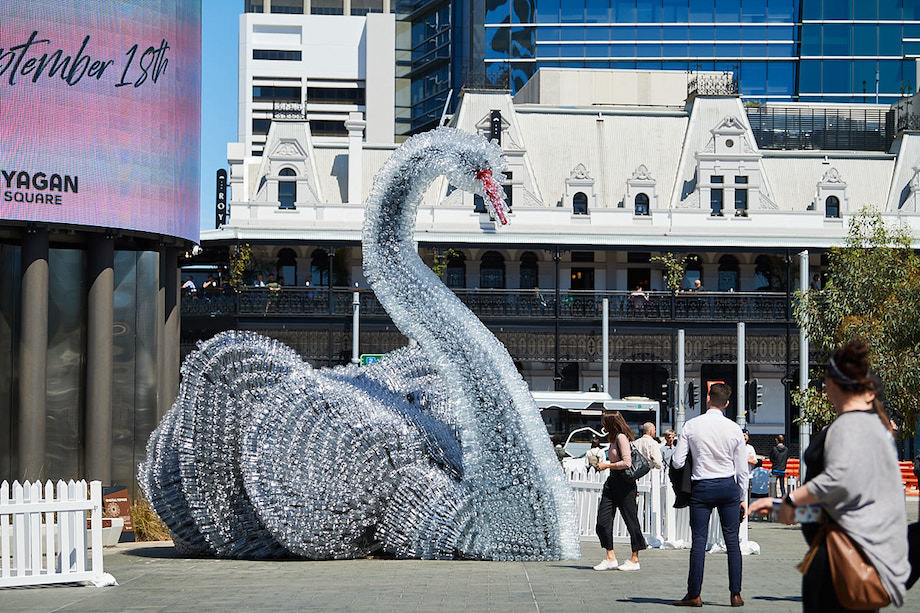 A giant Black $wan made from almost 10,000 plastic bottles has been revealed in Perth ahead of the launch of Containers for Change (CFC) in Western Australia. The Black $wan was created by The Works, part of RXP Group.

Beverage containers make up 44%* of all litter in WA even though they are made from easily recyclable materials such as glass, plastic, aluminum and cardboard. To encourage more citizens to collect and return them, CFC together with Western Australia Return Recycle Renew (WARRRL), the not-for-profit organisation created to set-up and run the scheme in the state, is providing a 10-cent refund per container recycled.

Says Hannah Beazley, head of external relations from WARRRL: “Our swan activation achieves all the key objectives we set out for this campaign – highlighting WA’s container consumption, litter and landfill (the issues we’re trying to solve); ensuring connection with our valued regions through digital content and social amplification; and bolstering scheme awareness through media generation. And it does all this in a uniquely West Australian way.

“The swan itself is a fantastic installation that’s generated interest from the moment the trucks rolled in. We can’t wait to see our swan ‘take flight’ in the weeks ahead; it’s a great introduction to a fantastic, community-based recycling scheme.

“Our thanks to The Works who managed a complicated build, created a full suite of content and accommodated the requirements of our many stakeholders on a tight timeframe, more than ably and always creatively and professionally.”

The five-meter-high, three-meter-wide and seven-meter-long Black Swan was unveiled in Yagan Square in Perth’s CBD on Friday 18 September, ahead of the scheme’s official launch on 1 October.

The Works, part of RXP Group, were appointed by CFC towards the end of 2019 and have created the awareness campaign. The swan was designed by Big Kahuna Imagineering and built using local WA bottles and suppliers.

To support the physical activation, The Works developed an AR Instagram filter of a black swan, complete with quacking noises, for users to share across social platforms.

The swan was designed to highlight container consumption in WA and the refund value these containers will soon have through Containers for Change. WA uses 1.3 billion containers a year. The 10,000-container swan represents just four minutes of WA’s container usage. To form the connection between the swan and the future refund value of containers, a competition with a $10,000 grand prize and six daily winners of $100 each is also up for grabs. The launch is being supported by PR, a media partnership with Mix 94.5 and social content.

Says Guy Patrick, creative director at The Works: “All West Aussies know to never mess with a Black Swan. They gracefully glide across the river but if you piss them off they get angry. This swan is no different, it means business. It stares down West Aussies and says, ‘take this problem seriously, solve it with the CfC program and make yourself some cash in the process’. It’s a scary wakeup call with an elegant solution.”

Says Roger Hayes from Containers for Change: “We are very proud to be launching into WA and are looking forward to seeing the positive impact the scheme will bring to both the WA environment and communities within it.” 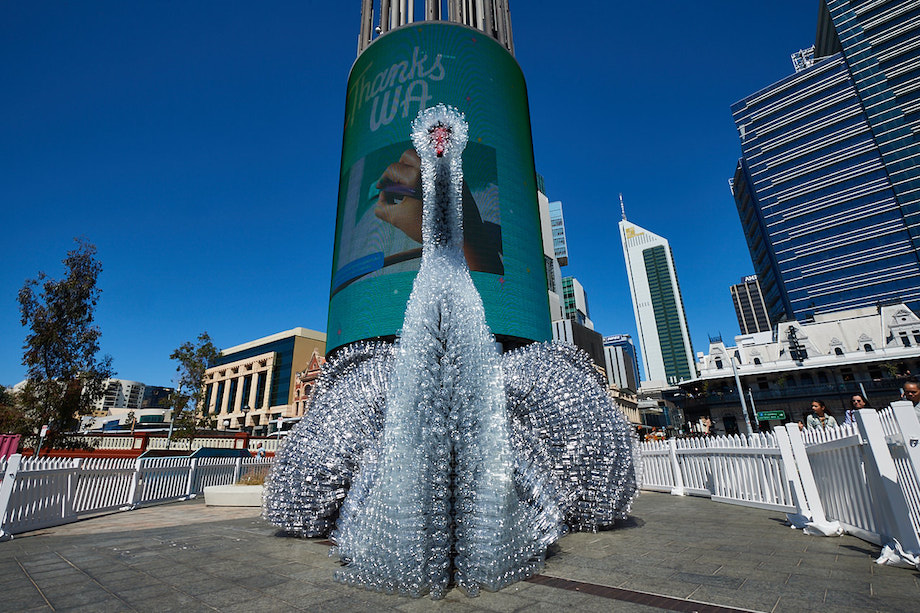