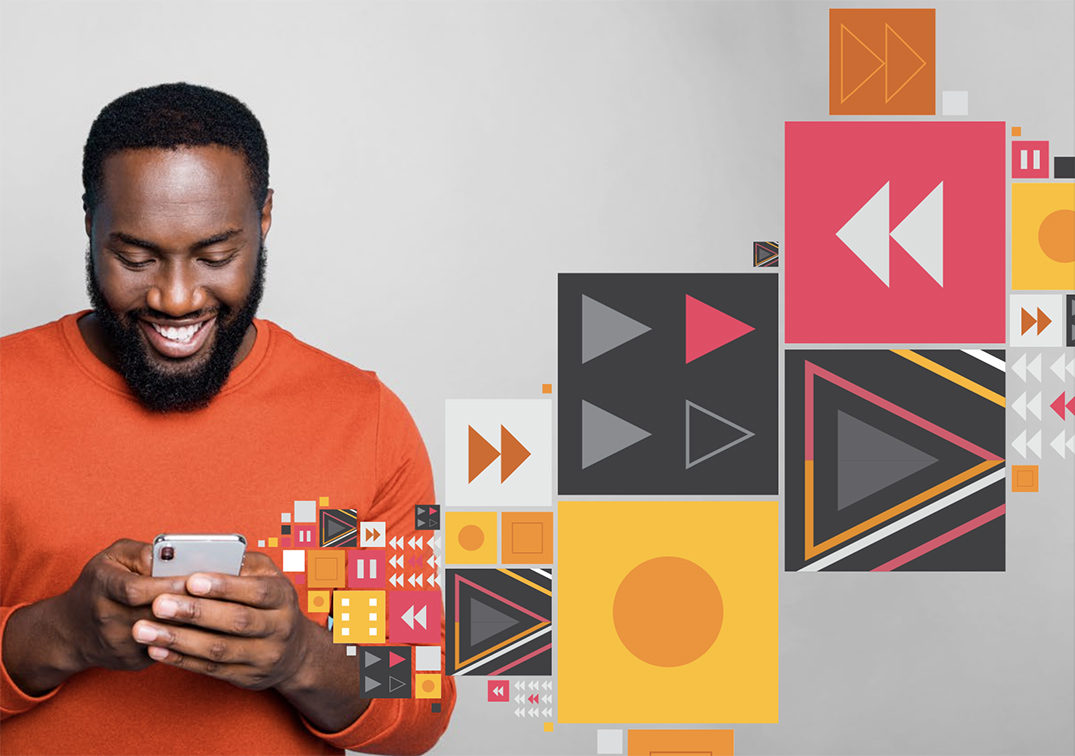 The Australian entertainment and media (E&M) industry surged ahead last year which saw unprecedented growth. Consumer spending rose 6.23 percent from the prior year reaching A$45.6 billion making it the highest single year leap in the history of PwC’s E&M Outlook. The 21st edition of PwC Australia’s annual Australian Entertainment and Media Outlook revealed that in 2021, Australians spent more on entertainment, media and internet access services than ever before.

Supercharged by subscription services and gaming, and boosted by the return of in-person entertainment, by the end of 2022 each household is expected to be spending A$510 more than in 2019 before the pandemic hit. It is expected a further A$7.2 billion in consumer spend will be on the table for entertainment, media and internet access companies to challenge for in the forecast period between 2023 and 2026.

Similarly, in the second half of 2021, advertising revenue accelerated beyond all predictions as marketers sought to capitalise on positive consumer sentiment despite lockdowns persisting, reaching A$19.7 billion, an increase of 20.2 percent. PwC remains optimistic that there will be further growth of 8.33 percent reaching A$21.46 billion in 2022, mainly boosted by early year gains from election spend, the return of categories such as travel, and continued digital-led growth. This growth is expected to however slow in the forecast period, flattening in 2025 and 2026, ultimately resulting in a compound annual growth rate (CAGR) of 4.4 percent, and a total of A$24.4 billion to 2026.

This year’s report also features Retailer Media – a breakout area of the industry that has been gaining increased attention in recent times. This special report explores what is covered under the umbrella of retailer media – across both eCommerce and physical retail media assets – the drivers of growth and how retailers of all kinds might generate new revenue. The research found a broad range of views and approaches to retailer media and includes a concise view of the market as it currently operates and as it will evolve over time. PwC forecasts this sector will grow at a 20.3 percent CAGR, reaching over A$2.1 billion in 2026. This is made up of both retailers increasingly turning their attention to this high margin space, as well as the rise of Amazon and other eCommerce players in Australia.

PwC Australia Director and Australian Entertainment and Media Outlook Editor Dan Robins said that though the darkest period of the pandemic is behind us, its effect on disruption, both as challenges and opportunity creation have remained.

“Where the initial wave of the pandemic may have been characterised by households reigning in spend, coupled with the inability to visit in-person entertainment, the second wave into 2021 saw consumers turn to entertainment and media to help alleviate the boredom of extended lockdowns with a more confident approach to spending. Moreover, as in-person events return, this spending is likely to extend alongside habits around subscriptions, gaming and access to content likely to stick.

“It was broadly believed consumers were stockpiling savings and consumer spending may have been down, given that in-person events are still only steadily returning and crowds returning through late 2021 and into 2022, this is certainly not the case. Digitised entertainment and media has entwined itself in our daily lives, and people are consuming content across more devices, at all times of the day, in all types of places,” said Robins.

Ad market roars back, breathing health into the sector… but will it slow?

The uncertainty in 2020 led to a -7.1 percent contraction in total advertising spend. However, as 2021 progressed, spending accelerated to reach A$19.7 billion, a year on year increase of 20.2 percent and 17 percent up compared to 2019’s previous ‘normality’.

Internet-based advertising continued to grow its dominant share of the total advertising market, growing by 35 percent year on year to a total of A$13 billion. ‘Traditional’ internet advertising subsegments posted large gains – Search (+36 percent to A$5.70 billion) and Display (+57 percent to 2.75 billion). 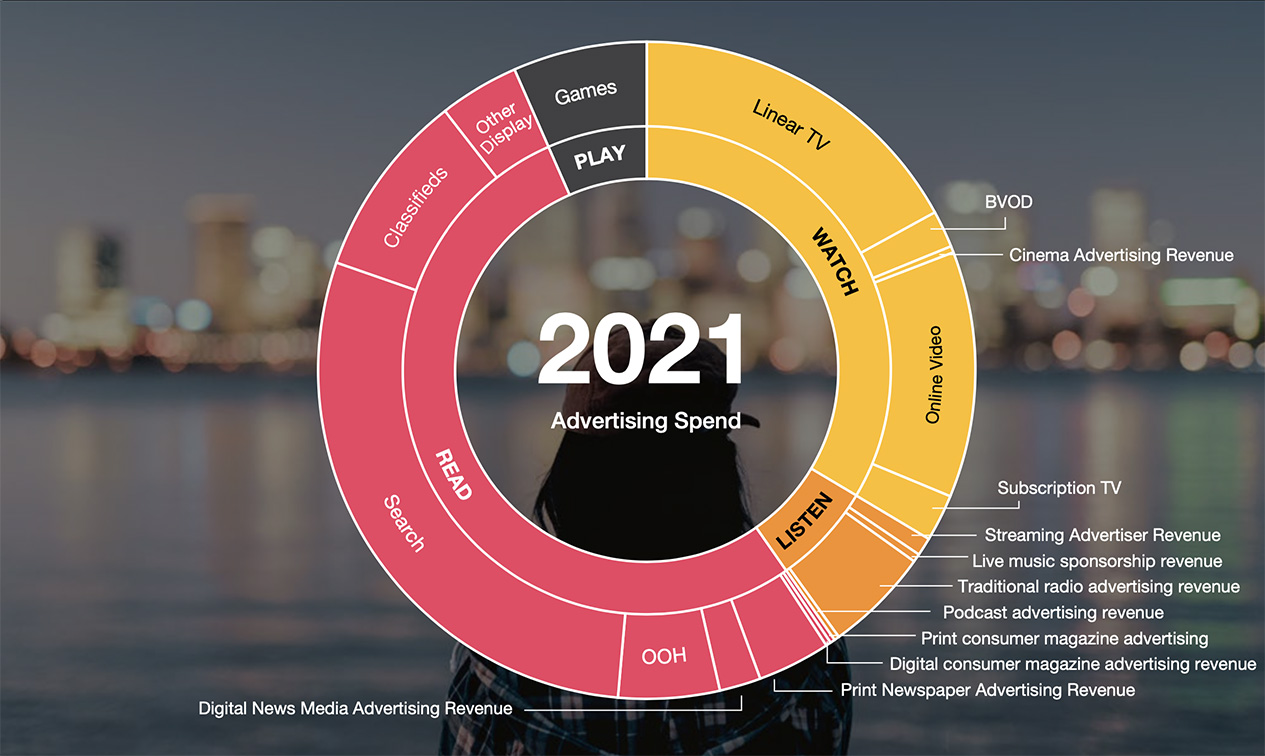 Samantha Johnson, Entertainment and Media Assurance Partner at PwC Australia, said: “One of the most striking elements of the growth story for the sector was the acceleration in advertising spend in the second half of 2021. This was driven by both a push by marketers to win in e-commerce during lockdowns which saw an uptick in spend within the ‘traditional’ internet advertising categories of search and display, as well as in the internet-enabled counterparts of linear channels – Broadcaster Video on Demand (BVOD) for example. We see this continuing to drive growth within the ads market more broadly as digital versions of TV, OOH, radio and publishing grow, balancing declines in their linear, offline alternatives.”

Despite this recent growth, longer term there are some concerns. Robins said, “While the recent return to consumer and marketer confidence has been positive, our forecasts for the advertising market indicate that these high levels of growth may not last. Into 2023 we expect growth to slow to 4.5 percent (from 8.3 percent in 2022), dampening further to near-flat in the subsequent forecast years. This will, however, equate to A$7.32 billion more being spent annually in 2026 on advertising in Australia than pre-pandemic.”

Catching and riding the growth wave.

There are seven defining factors for growth through 2021 and 2022
1. The subscription economy – Australians now manage 6.5 premium subscriptions from a selection of over 100 currently available across video-on-demand, audio, news and lifestyle content, gaming and other sources of entertainment. Subscriber growth is slowing in music streaming as it reaches saturation but still delivering growth to sectors transitioning from offline revenue sources, while further revenue growth is also expected in Subscription Video on Demand (SVOD).

2. Social gaming – In 2017, Australian gaming made up 21 percent of consumer spending (excluding access). In 2021, this stood at 26 percent and will continue to gain share: by 2026, gaming will account for close to 30 percent of consumer spending (excluding access) as the niche becomes more mainstream. In-game advertising reached A$1.3 billion in 2021 growing 8.8 percent and presents itself as an opportunity area.

4. Blurring of ads and media – The rapid rise of e-commerce, spurred by the ongoing pandemic, has further raised the importance of tying advertising investment to purchases. In-ad shopping reduces friction between advertising and purchase than previous click-throughs, while offering greater measurement of an ad’s effectiveness.

6. Return to and ‘Premiumisation’ of in person – Live entertainment increasingly competes against home-based channels to gain share of the consumer wallet and is working ever harder to entice consumers off their sofas.

7. The ‘Next New Thing’ – Companies are investing in creating new metaverse experiences and, though definitely nascent, NFTs have the potential to put power and control over rights and assets back into the hands of creators.

Laurence Dell, Technology, Media and Telecommunications Partner at PwC Australia, said: ”The race to win consumer spend and gain attention is clearly on. Advertisers are spending more than ever to reach consumers and consumers are spending at record levels on entertainment and media. What is particularly exciting as we look ahead, is that the increase in consumer spending is set to continue, so the race to win growth is still only at half time.

“Organisations that will take a large share of the future growth in consumer spending will be those that can deliver uniquely valued customer experiences, underpinned by frictionless digital. The gaming sector is showing that low friction digital purchasing drives growth be that in terms of titles or in-game. Moreover, there is opportunity in subscriptions, but these will need to clearly articulate the value and deliver on customer experience to remain ‘must haves’.”