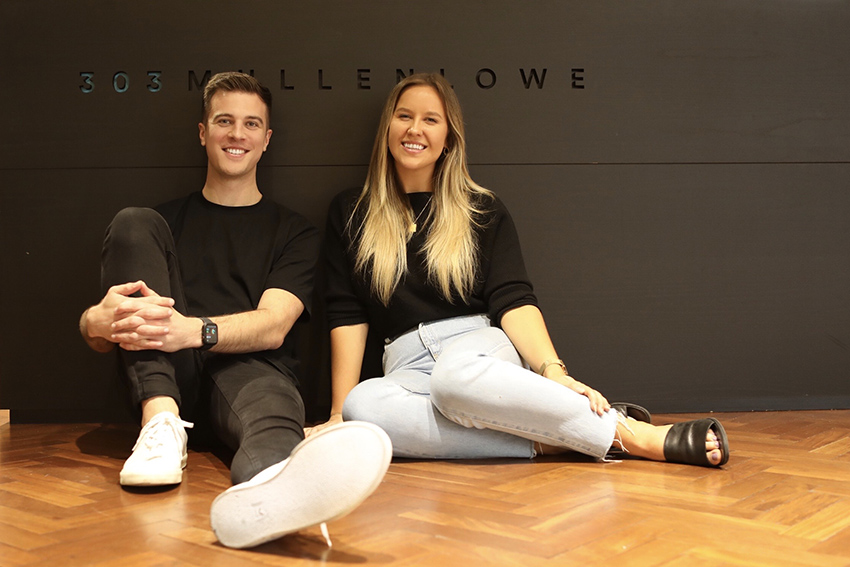 We all know that 2020 was a year that was anything, but normal but imagine coming into the workforce, in a creative, people focussed field, only to find yourself having to learn the ropes via Teams meetings from your living room. Campaign Brief spoke to 303 MullenLowe young guns Lara Hudson and David Svarc.

Life in lockdown was hard enough for the seasoned folk within the industry, but for those trying to learn the business as they kick start their career – like Lara Hudson (pictured right) and David Svarc (pictured left) – a whole different ball game and next level challenge. But the 303 MullenLowe young guns duo rose to the challenge.

Graduating from University and beginning your first job as a junior is exciting and scary enough as is, then throw in a global pandemic and a 3-month lockdown and see whether you sink or swim. Hudson and Svarc began their journey into the wonderful world of Advertising in February 2020, bright eyed and bushy tailed, and ready for whatever the industry had in store..or so they thought…

A month after landing Coordinator roles in the Business Management team at 303 MullenLowe Perth, the focus was on wrapping heads around client accounts, meeting new co-workers and planning for the year ahead.

Enter the emergence of COVID-19.

When news came that the office would start to work from home nothing much was thought of it.. as the view back then was that we’d all be back in office come mid-March.

Three weeks later and then a month and another after that..felt like there was no end in sight. People were losing jobs, and as newest kids on the block, Hudson and Svarc were concerned.

Todd Baker and Rene Migliore as leaders of the business were concerned about business impact too, but committed to keeping their team in roles.

When you don’t know what normal is in ad land, the ‘new’ normal was Hudson and Svarc’s norm from the get go.

A year on, ‘normal’ in advertising has taken on new meaning for them both, and they are now thriving as they embrace life in agency, in real life.

They credit their leaders and the culture at 303 MullenLowe for helping them not only navigate their first year out of university, but navigating the world of advertising in an environment that was anything but normal.

“Amazingly the culture of 303 MullenLowe was entrenched among us all from afar,” said Hudson. “Not an easy thing for an agency to do but Todd and Rene made people feeling part of an inclusive team a top priority.”

Added Hudson: “The most difficult part of working from home (WFH) was the lack of communication we had with colleagues and clients. We made the most of the situation through daily catch ups, constant messaging on Teams and lots of checking in with one another. However, you really can’t beat a face-to-face chat. One of the main roles of an Account Coordinator is developing and nurturing relationships with clients, you’re the funnel between the agency and the client so it’s your job to ensure things run smoothly and the client is happy, which is made more difficult when everything is done virtually. We were lucky enough to start in the office so at least we were able to learn the basics and meet everyone before we went into lockdown, but we’re definitely more appreciative of being able to be around one another again.”

“Once we were WFH our greatest motivators were our co-workers,” explained Svarc. “Having a great support network that never hesitated to offer a helping hand made us want to succeed. We tried to keep things interesting by continuing our monthly business management dinners, reading the horoscopes and the quiz during lunch every day and organising a buddy system to ensure everyone was doing alright. There’s only so much you can do virtually, but we made the most of it. Even from WFH we could tell that 303 had a great company culture which we felt lucky to be a part of. It just made us all that more excited to get back into the office and experience it properly.”

“It wasn’t just us who were new to this way of working. New ideas were always welcomed because we had to adapt quickly and although at times this meant a lot of troubleshooting, it has paid off in the long run. One year on, so much positive change has occurred from all of us adjusting and adapting to the new way of working, which has allowed us to have a more flexible working schedule and because we were forced to adjust how we went about getting the job done.”

For Svarc the campaigns that have been the highlight so far are Awesome Arts Australia, and JWH Group.

“The brand campaigns across the JWH Group is a highlight for me. The client found themselves in an interesting position due to external factors of the construction industry, various grants and Covid-19. Partnering with the client to effectively communicate and reinforce JWH’s long history with local West Australians at a time when consumer trust mattered more than ever. It was a highlight to see how adapting the creative in line with relevant messaging resulted in a positive response to these long-standing brands. The campaign gave me great exposure to what an integrated campaign entails and an understanding of the different creative executions and tactics used across multiple channels.”

Hudson singles out Edith Cowan University’s Undergraduate Course to Career campaign as her highlight so far.

“The team at ECU developed a campaign that showcased some of ECU’s amazing graduates and outlined the course they took to get to their career. This was a highlight because of the simple, yet effective nature of the campaign that resonated with the core audience. Seeking employment after Uni is always difficult, even when there isn’t a global pandemic, so the team here wanted to show this was possible for students through a number of different mediums across digital and traditional channels.”

Said Migliore: “We’ve always loved the endless enthusiasm and excitement that a graduate brings to the agency – to offset those of us a little more weathered! When Lara and David started at 303ML it was clear they both had loads of that excitement and enthusiasm to learn, as well as a quiet confidence in their ability to pick up new tasks and deliver for the team around them. Starting at an ad agency is baptism of fire under ‘normal’ conditions, but then Lara and David had to deal with the impact of Covid on their new agency life! It’s been impressive to see them develop professionally and make their mark on the agency culture, all under unusual and pressurised conditions.”