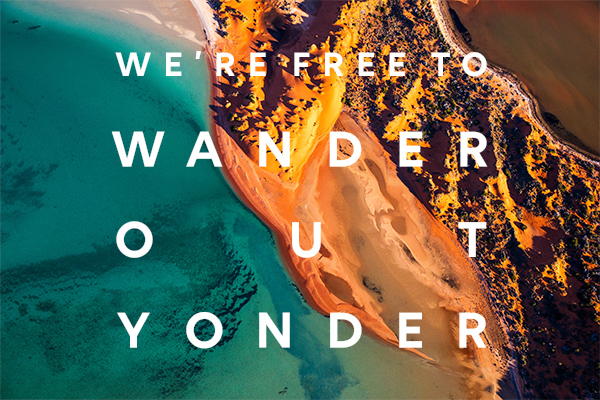 Swimming with whale sharks, stargazing with the world’s first astronomers or discovering hidden waterfalls and forgotten gorges are just some of the unique Western Australian experiences that form part of Tourism WA’s new intrastate campaign via newly appointed creative agency The Monkeys to entice people to get out and explore our wonderful State.

The campaign’s focus is to encourage West Aussies to take a different kind of holiday, travel to new places, and seek out new experiences.

The tagline ‘We’re free to Wander out Yonder’ aims to celebrate the feeling of freedom on our first adventures since travel restrictions were lifted.


The campaign, created by The Monkeys which was appointed to the account earlier this year, will initially feature print, digital media and radio (below) advertising and later expand to include targeted cooperative marketing campaigns, including holiday offers across hotels, holiday parks, campervans and a variety of tours and experiences.

West Australians are encouraged to support the campaign by using the hashtag #wanderoutyonder when visiting their favourite destinations around the State.

Targeting residents from all over WA, the campaign will inspire locals to take a different type of holiday, by exploring locations they’ve never been and embarking on experiences they’ve never had, with friendly operators who are ready to welcome them.

Tourism WA is working with the Regional Tourism Organisations (RTOs) and Tourism Council WA to promote compelling experiences and road trips, to encourage locals to holiday in WA and book direct with industry partners.

The campaign will:
• Target WA residents planning a holiday this year
• Drive immediate visitation
• Promote compelling experiences that are worth travelling for
• Encourage visitors to book direct with industry

Says Mark McGowan, WA premier: “There has never been a better time to travel in our own backyard and support local Western Australian tourism businesses in Perth and across the regions.

“The State Government is focused on reinvigorating and supporting WA’s tourism industry, which significantly contributes to the State’s economy.

“With most of the State’s borders now lifted, it is time to wander out there, explore and support your State.

“Whether it’s a longer trip across our State or just a staycation in your home town – be it the city or regions, take your time and go for a wander, you’ll be impressed with what we have to offer.”

Says Paul Papalia, tourism minister for WA: “We’re asking people to visit places they may have been before, but experience them in a different light.

“For example, book into a luxury hotel in the city, take a road trip down to Margaret River and walk part of the Cape to Cape track, or head up to the Coral Coast and explore the many wonders of the Ningaloo Reef.

“The campaign reminds everyone that whatever kind of holiday you are dreaming of, you can have that experience right here in Western Australia.

“We also want to encourage West Aussies that now is the time to visit that local destination you have been dreaming of.

“There are so many adventures available throughout our wonderful State just waiting to be discovered – it’s time to Wander out Yonder and have a memorable holiday in WA.”