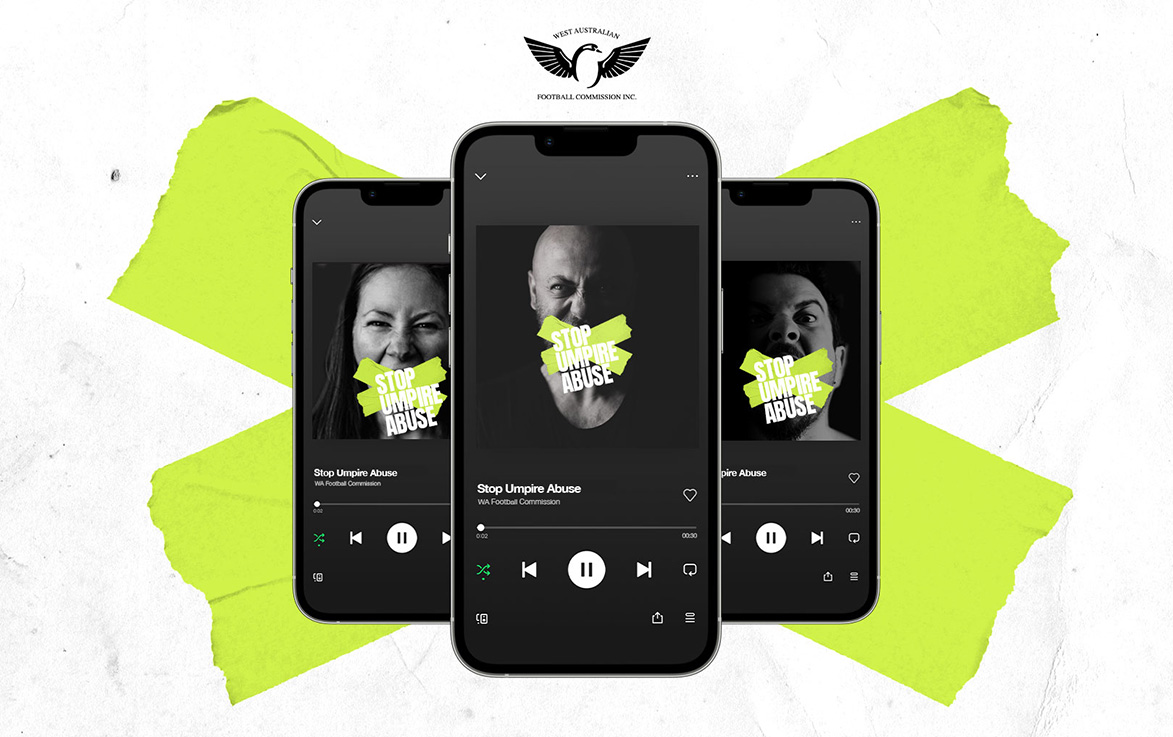 Western Australian’s love football: it has a culture where passion is strong, and emotions run high. Unfortunately, unacceptable acts of aggression are happening at every level of the sport. From junior leagues to WAFL, blatant, unwarranted hostility aimed at umpires is impacting them on a deeply personal level, and in some cases they are turning away from the game they love.

Marketforce partnered with the WA Football Commission (WAFC), Flare and Cue Sound to create a new campaign called Stop Umpire Abuse, incorporating a standout radio campaign confronting the ugly truth behind the abuse, and some deeply personal interviews and stories with Flare’s production team in a complimentary content piece.

Former AFL umpire Dean Margetts, the WAFC’s WAFL and WAFLW Umpiring Operations Manager, told Gareth Parker on 6PR Breakfast that he believed the campaign, featuring powerful advertisements, will have real impact: “Maybe these ads can bring [bad behaviour] to the front of the line and create some change,” he said, after relaying a recent story of umpire abuse at a Year 7 game.

Head of Marketing at the WAFC, Nerida Collins, said: “170 umpires (WAFL and junior community) saw the campaign for the first time and gave an unpromoted round of applause in the middle of the presentation. They feel seen and supported on this topic for the first time. What a moment to be a part of.”

“This campaign has already kicked off great debate and conversation around the importance of creating a safe space for everyone involved in football. I can’t wait to see the impact it has across the board, and I especially hope we see our umpires returning in 2023 to keep honing their craft.”

To draw attention to the problem the campaign exposes the kind of personal issues people are inadvertently revealing when hurling abuse at a football game. It asks us to stop think about what the abuse says about us, more than the umpire or the calls that they are making.

Digital radio and film content are the first phase of an integrated campaign which will include digital and other channels. The campaign was written by Marketforce creative team Mitch Mitchell and Luke Williams. It’s the first piece of work Williams has been involved with since he’s left the agency he recently co-founded (SOCA) to work at Marketforce.