Edith Cowan University (ECU) has launched its new brand campaign ‘World Ready’, created by 303 MullenLowe Perth, to show how an ECU education is the bridge connecting students to the rest of the world.

And for the first time, the University is featuring its research in a corporate-level campaign, reflecting ECU’s growing world-class research output and reputation.

Says Julia Turner, brand and marketing director, ECU: “’World Ready’ means we prepare our students to take on the world. We’re the bridge between where they are now and where they might want to go in the world.

“And we can do that because ECU is one of the world’s best young universities; the top public university for undergraduate teaching quality in Australia and one of the best for skills development and student experience.“

Says Richard Berney, executive creative director, 303 MullenLowe, Perth: “The beauty of this idea lies in its simplicity. It illustrates how ECU’s academics, researchers, facilities and industry connections work in unison to produce the kinds of brilliant minds and ideas that the world truly needs.”

ECU’s world class research is represented by Professor Mel Ziman, who made headlines around the world last year after the Melanoma Research Group developed a blood test to detect the deadly cancer in its early stages.

The West Coast Eagles CEO Trevor Nisbett also features. Through a partnership with the Eagles coaching staff, ECU researchers and students have gained valuable access to the club for research projects and Work Integrated Learning opportunities.

‘World Ready’ builds on ECU’s previous campaign, ‘ Get Ready’, but is differentiated by the use of the bridge metaphor and a new international focus.

The campaign will include executions across outdoor, digital, TV and print. 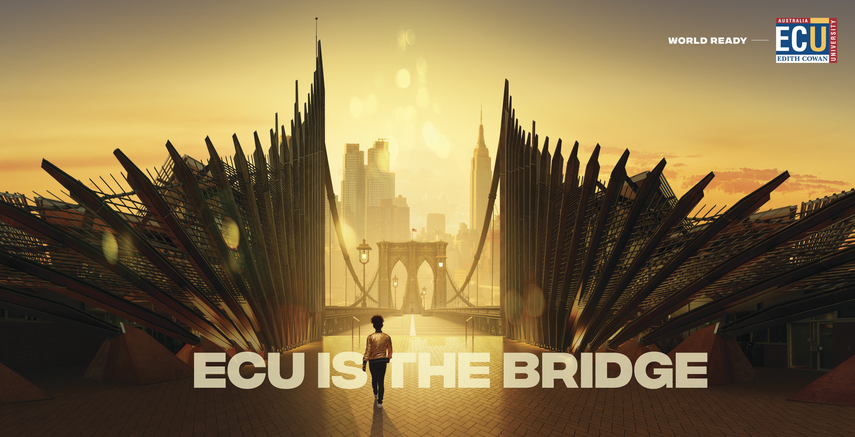