Over the past few years, Double Barrel has transformed from a small home office to a busy company, with international clients such as Paramount Pictures and Amazon Studios.

Founded by film school colleagues Nathan Stone and Stuart Campbell, the Leederville company has made a name for itself as one of Perth’s leading animation and visual effects houses. The pair met on the very first day of their film course at Central TAFE back in 1994. Stone borrowed a few dollars from Campbell to buy a cheeseburger meal, kicking off a partnership that has continued to thrive over twenty years later.

Bonding over a passion for dynamic storytelling, Stone and Campbell shot and produced each other’s short films during their final year. The mock studio ident at the beginning of each film: Double Barrel Productions. During the course, the guys took a keen interest in animation and special effects, in no small part fuelled by a love for the popular genre films of the 80s, such as the Star Wars and Indiana Jones trilogies.

After graduating, both made the move over east for work. Stone landed at Animal Logic in Sydney as an animator in the TVC department. Later he travelled to Munich to supervise animation on features at Trixter. Campbell stayed in Melbourne at Torus Games, supervising animation and directing cinematics for licenses such as Shrek, and Scooby-Doo.

Over the years the two continued to collaborate, writing scripts and making shorts. Stone’s film Blue was a Tropfest finalist in 2009. Creating shorts expanded their skills into visual effects and, after a decade of working for others, Stone and Campbell decided to return to Perth in 2009 to start a company of their own.

“We wanted to bring the knowledge we’d gained back to Perth and start something ourselves.” said Campbell. “Our families were here, which is a common reason people move back, but we also had a genuine desire to be part of the industry in our hometown.”

Services would include visual effects for film and television, motion graphics for documentary series and animation for TVC and games.

“We knew it would be a challenge at first – and it was. Luckily, we had a very generous friend who let us work out of his spare room while we got on our feet. After a few strong projects, word-of-mouth began to open a few doors.”

Two early visual effects jobs for db were Australian feature films, Wasted On The Young and These Final Hours, directed by Ben C. Lucas and Zak Hilditch, respectively. In particular, These Final Hours’ world-ending climax provided an opportunity to showcase Double Barrel’s capabilities and ability to work within a tight time-frame and modest budget.

The years that followed were filled with visual effects jobs for music videos and short films. db formed relationships with companies like Prospero Productions and Electric Pictures, working on motion graphics for their successful documentary series. A new game animation gig was never too far away, such as the survivalist-horror The Forrest and the stunning digital card game Armello.

In 2017, vfx work on the feature Gringo came about through db’s long-standing relationship with director Nash Edgerton. After helping out with visual effects on a number of his short films, Edgerton reached out to the guys when looking for vendors on his dark action-comedy.

“It was a sizeable job in the end – 260 shots – and a great opportunity to prove ourselves on a larger scale project,” said Stone. “We had a team of five in-house and a few remote artists. The shot list changed daily, so staying on top of the schedule became a big part of the job.”

It wasn’t long before db were working with Edgerton again, this time on Mr Inbetween, the tv series he directed and produced for FX Australia.

“We took care of a few of the trickier shots. It’s a quirky and violent show, so mainly muzzle flashes for guns, blood splats, fire and smoke.”

Next up was work on Anne Fletcher’s Dumplin’, an independent film starring Jennifer Aniston and Aussie Danielle Macdonald It was sold to Netflix and released December 2018.

“These films have allowed us to work with amazing Supervisors and Post teams in L.A. and established some great relationships,” said Campbell. “But we’re still competing for these jobs against overseas companies with more resources at their disposal. So in our mind, it comes down to quality and service. We pride ourselves on putting together skilled teams, having great communication and delivering polished work.”

Released earlier this year was What Men Want for Paramount Pictures. A team of five artists worked across 110 shots, with effects ranging from creating magic potions with 3D particles to crew removals and screen inserts. The largest scene was a thirty shot green screen sequence filmed at the Atlanta Hawks’ home stadium. This project was a turning point for db, being their first for a major US studio and successfully passing Paramount’s comprehensive security audit during the bidding stage.

Also released in 2019 was Hotel Mumbai, directed by Anthony Maras and inspired by the events surrounding the terrorist attack on the Taj Hotel in 2008.

“Hotel Mumbai was a great project but certainly had some challenges. It had quite a long post period and some tricky shots,” said Stone. “Anthony is a perfectionist, but the results speak for themselves. It’s a pretty amazing debut feature and something we’re proud to be a part of.”

TVCs is an area where the company hopes to attract more work in the future. In 2016, Stone and Campbell produced and directed 15- and 30-second spots for Dreamstart Homes, featuring a high-end 3D character. db worked with the client on the concept, then created an animated 3D pre-vis to illustrate the sequence and help plan their shoot.

“Breaking down a scene into shots and planning the staging is something we have a great deal of experience with and 3D is the perfect tool for unlocking the possibilities,” said Campbell. “We’re big fans of using the camera as a character and revealing information in a creative way.”

See more of Double Barrel’s animation and visual effects work at doublebarrelvfx.com or call 0401 959 311 to have a chat about your requirements. 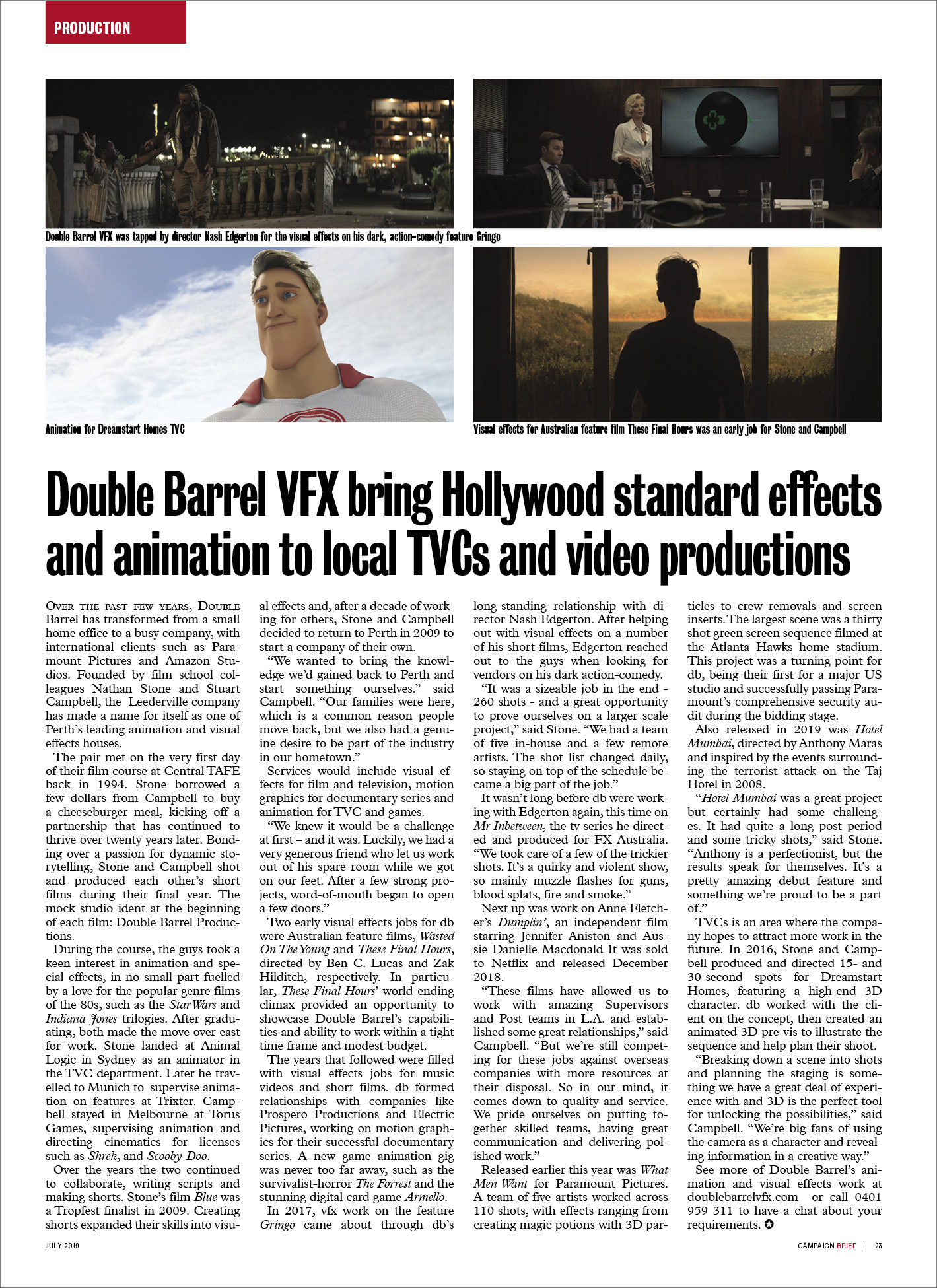