WORDS VS PICTURES: the unwinnable debate 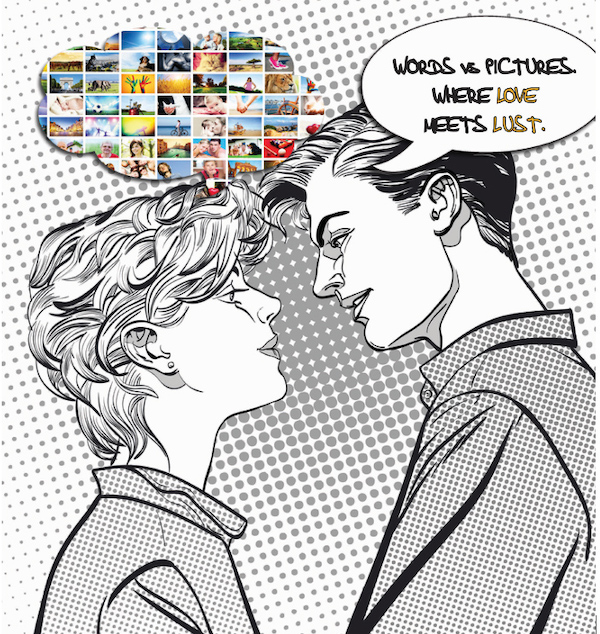 Many have written about creativity. But few have defined what it may be. It is my view that Creative Departments and Creative Directors are poorly named. Ought they be renamed ‘Ideas Departments’ and ‘Ideas Directors?’ Why? Because whether something is ‘creative’ is a judgement, not an empirical, irrefutable fact.

Whether something is creative or not, lies in the eyes of the beholder – and is judged by a combination of their own world view formed from their life experiences, their education, their culture and their literacy. Plus their individual degree of imagination.

If you agree that the notion of having ideas is central to imagination, then everyone is creative. You simply cannot go through life without having ideas – that is a universal human truth. It’s what separates us from other forms of life – that and the unique ability to craft and express them.

De Bono likened the creation of ideas to puddles lying on a tarpaulin after it has rained. Lift up one corner of the tarp and then drop it down. You’ll find several new puddles have emerged when the puddles run into each other. It’s like when new and unexpected thoughts collide with the original idea. This generally results in the creation of new thoughts.

Experienced ‘idea creators’ (IE: writers and art directors) train themselves to suspend judgement whether their idea is creative or not. In my experience, I have learnt that pre-emptive judgement tends to block any further development of an idea or the creation of new ones. It’s when the ‘love’ factor takes over; IE: it’s easy fall in love with an idea at the expense of doing any more work to develop alternatives – or to test the validity of the original.

Self-censoring is a process that should occur after the process of ideation has been completed. And then, it is not whether the idea is creative or not. In an advertising sense, it is whether it’s on brief and whether it has worth or value. I developed a simple matrix (freely available via the Sharper Pencil website) to assess the likely performance and efficacy of an idea or concept.

Whether ideas are creative or not, is rarely, if at all, decided their creators – unless egos override the process. Judgment lies with those to whom the idea is exposed IE: everyone else. And we each use varying measures of the criteria listed above, to decide on the degree of their creativity. And that’s besides their value and worth.

Intellectual this viewpoint may be. But in essence, often, the issue comes down to how the idea is executed – and how well it is expressed. Again – another external judgement.

As far as copywriting goes, I have always tried to employ five basic rules: 1. One thought, one sentence; 2. Use plain English; 3. Avoid conjunctions; 4. Write using the active voice; 5. Be consistent with language.

Despite this, I cannot remember the number of times an art director has said to me, “I can say all those words you have written, with this picture.” Tish-boom!

I prefer the word ‘communication’ rather than ‘advertising.’ Ideas can manifest themselves as actions, words, pictures – motion or static, and sound. However, for the purposes of this piece, I have restricted myself to the most traditional form of expression – that of words and pictures.

Most of that which follows, I purloined from the internet. Forgive me.

THE CASE FOR WORDS:

It took a hundred days for 55 delegates to write the US Constitution. It has no pictures. It is made up entirely of words. Since its completion in 1787, it has become the foundation of one of the strongest super powers ever known.

How did they do it? They focused entirely on the message. The power of marketing, whether via brochure, website, annual report, press ad or any other medium, comes through the words on the page. If the words aren’t right, the best design in the world won’t save it.

How do you get the words right? When writing about your own business, know what you want to say. The challenge lies not with what you want to say, but whether it can be written in a way that engages your target audience, and converts it into a message they want to hear.

Copywriting isn’t about a set number of words on a page. It’s not about filling a space. It’s about delivering a message to the target audience in a way that will induce them to either react. Or respond. But never ignore.

The US constitution begins ‘We the people, for the people’ In those six words we know who they are, and for whom they writing. Author, Lesley Kemp thinks they nailed it right there.

THE CASE FOR PICTURES:

Take the toilet sign. Toilets have different interpretations in different countries. It would be very frustrating if one does not recognise the word ‘toilet’ in another language. However with the universal toilet sign, all problems are solved since the sign for males and females are similar all over the world.

Similarly, showing a taxi driver a picture of the train station is likely more effective than expecting the driver to understand you by making weird train noises. You’d probably end up embarrassing yourself.

In these circumstances, a picture is more effective and powerful in bringing the meaning across than mere words. So says Wei Rong, a contemporary Chinese artist.

Is a picture is more powerful than mere words? Pictures reach audiences more directly than mere words alone. They very often convey the author’s attitude to the subject, and enhance our understanding of the text.

A picture explains complicated ideas at a glance. Plus, they teach those who cannot read.

They engage us, prompt our imagination, and appeal to both readers and non-readers.

Hence the belief held by some, that a picture is more powerful than mere words.
——————————————–
So which is the most potent? Words or pictures? It is an unwinnable debate. It is the Yin and Yang of creativity. It is advertising’s own chicken and the egg conundrum; our own Ourobosos. Like baked beans on toast, one nearly always adds flavour or meaning to the other.