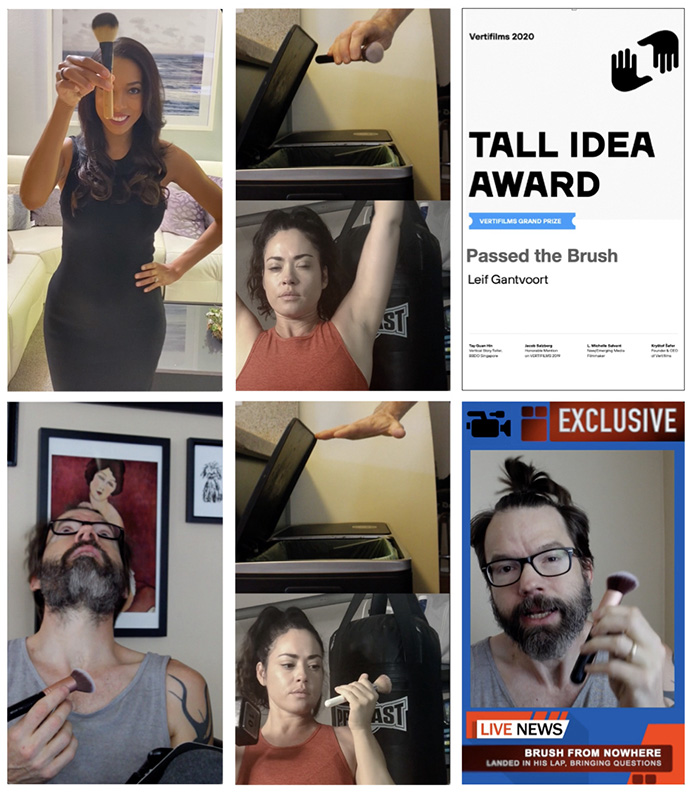 Global Creativity: TikTok’s “Pass the brush” challenge has some of the best beauty transformations you will see. It’s also the premise behind the hilarious vertical movie directed by Leif Gantvoort from the USA.

The winning vertical film hacks a popular trend and gives it an unexpected twist. When a makeup brush mysteriously falls into one man’s lap, he is challenged to find meaning in what it is and who he is. Festival of vertical films VERTIFILMS PRAGUE 2020 announced “Passed the brush” is the winner of the TALL IDEA AWARD 2020.

“The decision of Jury was unanimous. Director Leif Gantvoort was very creative by using the vertical format and established visual style that was immediately copied on social networks. The Jury also announced four Honourable mentions and three Special mentions, in which awarded outstanding vertical films, which brought some outstanding value to its story.” says Founder and Director of VERTIFILMS PRAGUE Kristof Safer. The main award was presented by the Hana Třeštíková, the Prague City Councillor.

“More and more people are intrigued by the vertical formats in film making. I am excited and positively surprised by how people are consuming content this way. During the official awards ceremony, we received 20.000+ views, most of it on mobile phones. I believe this trend will continue to grow,” added Tay Guan Hin, Chief Creative Officer BBDO Singapore and vertical storyteller.

The Festival presented more then 100 vertical films on www.vertifilms.com.

Essential part of the festival is also the Pocket conference, in which influential keynote speakers shared their insights on vertical format. In this edition we welcomed amongst many others Adam Alshin and Paul Wysocan the global creative directors for Apple iPhone, who created The Stunt Double, directed by Oscar winning director Damien Chazelle. Walter Woodman from Canadian creative boutique shy kids presented their Emmy Nominated show The Content.

Other winners in the competition were:

For concept idea:
Where it all starts
Director: Jakub Volák, Czech Republic