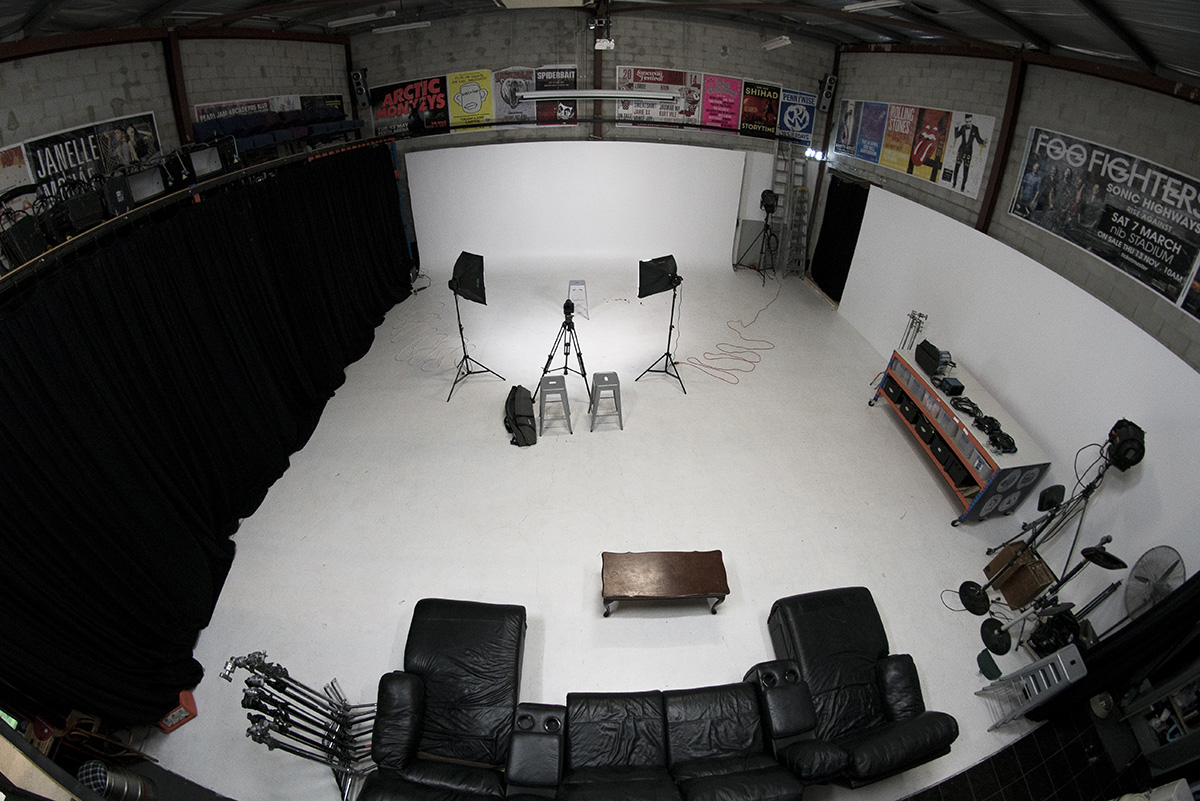 Johnny Ma Studios is one of the Perth industry’s most surprising and diverse companies.

For the last five years, this creative hub has been a secret gem housed in an unassuming Maylands warehouse. Visitors are at first struck by the eclectic décor that is unique yet unpretentious – a plethora of visual stimuli for the newcomer.

The front of the studio is a literal camera museum which includes a wall of super-8 cameras and even a 35mm projector from Cinema Paradiso. On the right is a 6m wide custom-built shelf housing a library of art books and antique classics.

Within the heart of the warehouse is an inviting lounge bathed in warm ambience generated by a cluster of lamps. The warehouse is alive with unusual props and monuments – a sentimental preservation of Perth’s local film history.

It’s also home to a 100sqm white studio space, complete with a cyclorama wall and black wrap-around curtains. The space and equipment are available for hire at a moderately inexpensive price to help foster the local art and film community.

“Occasionally we get some intrigued pedestrians wandering in to ask if this is either a Chinese restaurant or a second-hand furniture shop,” Johnny explains, cracking a smile. “But then they discover it’s a film/photo studio and also a print shop and they always take a business card.”

Clients such as Sandbox, 303 MullenLowe, Pilerats, and the ABC have shot in this space. Everything you see is clearly a labour of love that developed organically throughout the colourful existence of Johnny Ma Studios.

For a media marketing company, it is surprising that its existence has reached people only by word of mouth until now. The in-house creative team have been developing the space non-stop and are ready to open its doors to a wider public.

The print side of things, done under A0 Lets Go, is Perth’s only street poster company. Again, you’ve probably not heard of the company itself but you’ve definitely seen their work. They specialise in large format print (A0/B0) as well as execute guerrilla marketing campaigns to promote any sized event you can think of. Current clients include Live Nation, Frontier Touring, Chugg Entertainment, Secret Sounds and many more. They also print small format (posters, flyers, post cards) at a competitive price and have been doing this for the past 10 years which is an incredible feat for a local business.

Aside from coming up with creative marketing concepts for events, they also print event signage for clients such as Origin, Rushmore and Ice Cream Factory. The print section of the business can print anything from corflute, mesh, vinyl to wood. They always find a cheap, effective solution to help out clients and never shy of any last-minute rush prints even at after hours.

Much of the success thus far can be the credited to the interpersonal working relationship with clients who find this one-stop shop very approachable.

Not one to keep knowledge to himself, Johnny is known for his ‘can-do’ attitude, and local creatives arrive at all hours with a wide range of puzzles. No job is too big or too small – with all the resources and innovation at their fingertips, there’s an immediate solution for everything. In fact the bigger the challenge the better – “it’s all an excuse to upskill” – fluent in film lingo, he describes it as “character building.”

Recent projects have included placing huge vinyl decals in the front of Metro City for Dali Land. The team hadn’t installed signage on such a large scale before, but nonetheless rose to the challenge with gusto. Around the same time, they were given the task of dressing Uber cars for the Fringe World’s ‘backseat gigs’ promo – a totally different concept and a new car theme each week, with only a weekend turnaround in between

“Clive, my in-house graphic designer, did an amazing job once again, translating my disjointed sentences and hand gestures into comprehensive designs.”

And the best part of it was that he was able to hire an army of local Perth talent to collaborate on the project.

Johnny has quite the experience when it comes to film making, having produced, directed and edited over 30 music videos and a handful of TVCs in his time and worked effectively in the AD department, lighting, grips and more extensively production design, he is able to apply his knowledge to find the most effective method to find a solution to a problem. To everyone who asks why he chose to invest in opening a studio that doubles as a media marketing company,

Johnny says the warehouse was born out of necessity. He would have loved to have had access to an affordable studio back then when he was emerging and now he’s able to facilitate that for any upcoming filmmakers. After graduating he lamented that he couldn’t fully immerse himself in film life as he had to take care of his company, but after creating a studio space, the film life comes to him daily.

Johnny Ma Studios has established itself as an affordable one-stop shop specialising in street marketing and printing for events. It’s an adaptable space that welcomes experimentation. This well-equipped film studio and event space developed from his original background in film and a passion specifically for music videos. In the days of his film school studies, a lecturer made a passing remark that no one could ever make money from a film studio.

“But then I said fuck it, I’m gonna do it,” said Johnny. “We are all helping each other out, and growing up and up-skilling together. As we expand we can offer more for the community,” says Johnny, adding that “anything can happen here, and anyone’s dreams can come true”.

What does Johnny Ma Studios want to achieve in the future?

“As busy as this studio gets, I’d love to encourage more local photographers to come through and utilise the space so we can build our database,” Johnny says, gesturing his hand towards the studio. “I’d love to work with more advertising companies for any print solutions they may need for video shoots, billboards or any marketing concepts that need printing.”

Basically, the world is their oyster and they’re set on conquering it – one step at a time. 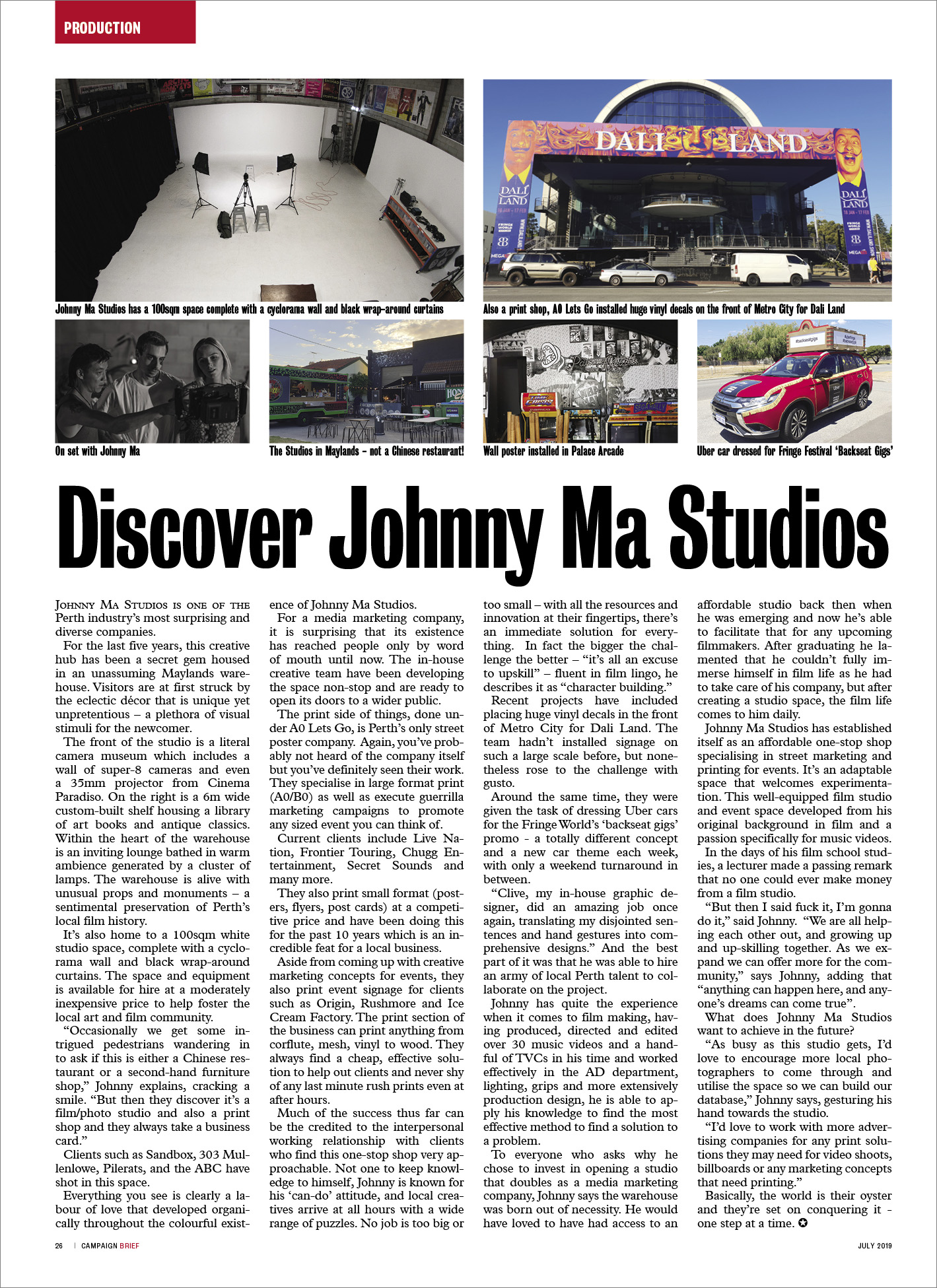