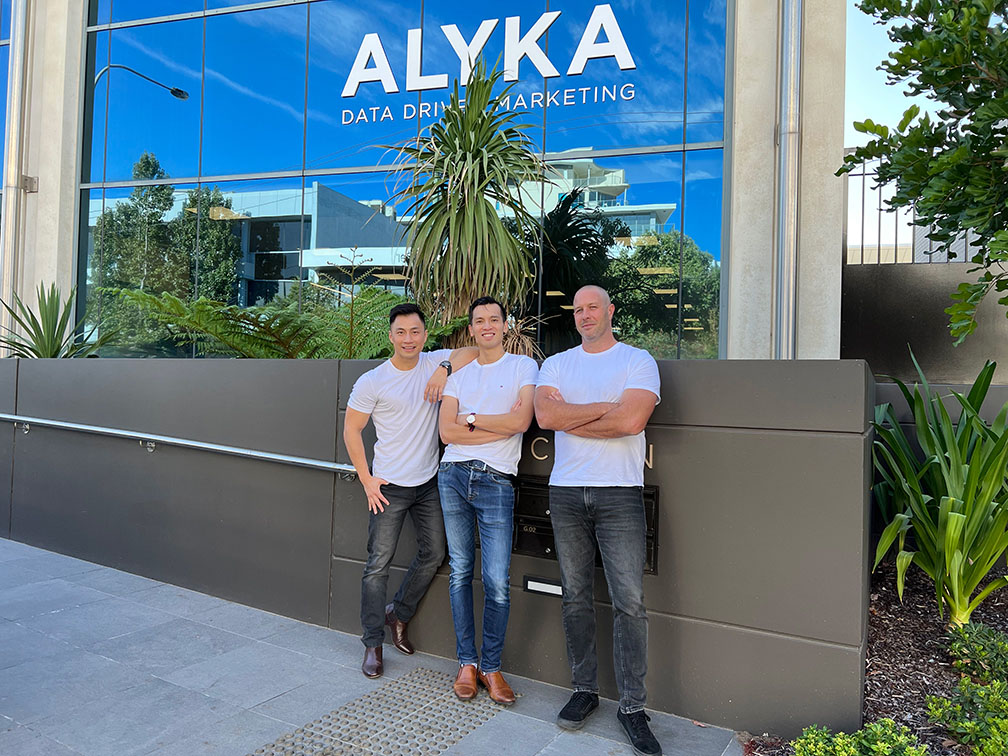 ALYKA has announced that David Birrell has joined Bernard Chia and Zion Ong to become a director and shareholder, the West-Perth digital agency. The new role will see Birrell focus less on operations and more on expanding ALYKA’s offering for clients.

The unlikely trio first met when Birrell (pictured right) joined ALYKA in the role of a project manager in 2010; their third employee since Chia (pictured left) and Ong (pictured middle) launched ALYKA in 2008. Birrell had a strong focus on systems and data, a welcomed strength that made some of Chia and Ong’s far-fetched ideas become a reality, by implementing processes that built a strong foundation for ALYKA’s future growth.

“Entrepreneurs typically have a hunger for fast growth, which often means quick decisions that can leave a bit of a mess in the process. I’ll be the first to admit that I’ll often have crazy ideas that I charge ahead with, without thinking of the consequences. Having David on the team means that things can happen, but in a more organised, realistic, and scalable way.” Ong said.

Fast-forward a few years, Birrell was promoted to general manager in 2013 to manage and integrate ALYKA’s new performance marketing division with the web development team. Continuing the focus on systems and processes, he played a key role in building the structure that shaped the future focus of the company; using data to drive all decisions for clients.

The opportunity to buy-in to the company was first presented to Birrell five years ago. “It wasn’t the right time. With a young family, I couldn’t commit to the role of a director. Plus, I knew I had more to give, and more achievements to make, as an employee, before taking the plunge.” Said Birrell.

Birrell’s next focus was on adding a MarTech (marketing technology) offering to ALYKA’s suite of services. “We were looking for a solution to our own problem and also many of our clients’, a way to effectively tie business performance on the profit and loss back to what was happening on the agency floor. After researching a number of CRMs, HubSpot was the stand-out choice for me. We adopted it internally, then started to implement it for our clients with an immediate impact on their bottom line.”

The partnership with HubSpot continued to grow, with ALYKA becoming WA’s first Diamond Solutions Partner in September last year. With Birrell’s leadership in the team, ALYKA continues to hold their position as one of Australia’s most respected HubSpot partners with clients on the east coast and internationally.

In his new role as a director, Birrell will be working more closely with clients in a strategic capacity, particularly in the MarTech area. “There’s so much potential with HubSpot for the Perth market. MarTech is relatively in its infancy here, so I’ll be working to change that. There are huge benefits for everyone to be in-tune with their data, so that’s what I’ll be focussing on.”