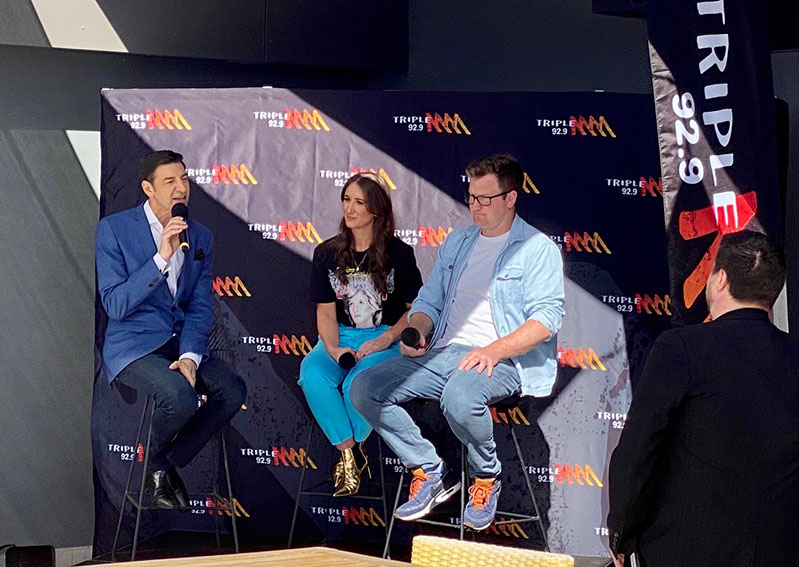 Perth’s worst kept secret is confirmed with the news this morning that Basil Zempilas will headline the new breakfast show on Perth’s newest radio station, 92.9 Triple M. He will be joined by co-hosts Xavier Ellis and Jenna Clarke.

92.9 Triple M launched on 1 December 2020 with a new rock format and will be offering a blend of rock, sport and comedy.

Zempilas will anchor the Triple M Breakfast show bringing his extensive media career as a radio and TV presenter and sports commentator to listeners. In October this year, Zempilas was also elected Perth’s 56th Lord Mayor.

A native West Australian, Zempilas began his media career at the Seven Network as a sports reporter and has worked as sports anchor at Seven, produced his own AFL show, Basil’s Footy Show, and has been a long time member of Seven’s AFL commentary team. During his career he has covered the 2000 Sydney Olympic Games, 2002 Winter Olympics, 2004 Athens Games and 2008 Beijing Games. In 2018 he joined Seven’s Weekend Sunrise as co-host.

Zempilas was previously a part of the 92.9 Breakfast show between 2008-2013, and more recently co-hosting 6PR’s breakfast show.

Ellis is a former Hawthorn Premiership player and Clarke is Assistant Editor of The West Australian.

SCA Chief Content Officer, Dave Cameron said: “There’s no-one more ‘Perth’ than Basil Zempilas, and having Baz be a part of launching 92.9 Triple M with a brand-new breakfast show in 2021, reinforces the fact that Triple M is here to cement itself with local content delivered by locally loved personalities just for local listeners. Baz combined with Eagles favourite and current 92.9 host Xavier Ellis, plus razor-sharp journalist Jenna Clarke make this a hugely exciting new local show, and we can’t wait to finally give listeners what’s long overdue at breakfast – something fresh and fun to wake up with. 92.9 Triple M has arrived – time to shake the city up a bit!”

SCA’s Head of WA Sales Noel Quick, was upbeat when Campaign Brief spoke to him this morning: “It’s really exciting to be able to finally bring Triple M into the Perth market. There’s a massive deficit in the city for people who enjoy rock music and no one does it better than Triple M. Our format, rock, sport and comedy, is unique and will offer clients a distinct point of difference in our market. Rather than have a bet each away with our audiences its clear, Triple M, 25-54 males and mix94.5, 30-54 females.”

Quick also made reference that localism is and will remain a major focus for Triple M Perth: “This radio station will be run by people who are born and bred in the West who can talk to Perth as true locals, combined that with the best of our national personalities and shows there’s plenty on offer for our clients and listeners.”